VailSpot reports that Senator Barbara Mikulski (D-Maryland) will soon announce that she will not seek reelection. 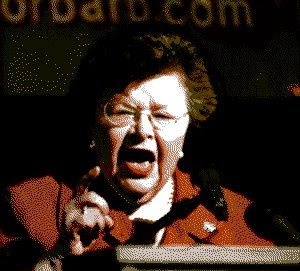 Mrs. Mikulski seriously fractured her right ankle last fall just prior to Edward M. Kennedy's death. Due to the severity of the fracture, she had to have open reduction surgery, that included the insertion of pins, as well as the use of special surgical boots, during recovery. She had tried to arrive in time for Mr. Kennedy's funeral but was turned away.

Her recovery has been exceptionally slow and she is evidently still in a great deal of pain. Reportedly, she has told her physician that she does not desire to seek reelection. Additionally, friends and family have been saying in the near future she will announce her retirement. Because of the very slow recovery, she has been forced to use a wheelchair, a walker or a cane in order to get around.

One of her complaints is that the health insurance that is provided for Congress is "poor" with high deductibles and "limitations" on coverage. My contact tells me that she told an aide that she should have inserted in the ObamaCare bill an amendment to improve Congressional health insurance!

Mrs. Mikulski was first elected to the Senate in 1986, and thus is a very senior member of the Democratic caucus. Despite this seniority, she has never been offered any important chairmanships or leadership positions. Born on July 20, 1936, she is 74 years old, come July...it is perhaps fitting that she has choose this year to retire...

Doesn't this behavior typify the Statist oligarchs who are the core of the modern Democrat Party? Mikulski was apparently less concerned with a sensible health care bill for constituents than improving her own "gold-plated" Congressional care.

Little wonder the citizenry is stockpiling tar and feathers.

at 8:46 PM
Email ThisBlogThis!Share to TwitterShare to FacebookShare to Pinterest
Labels: Democrats, Healthcare

Yes of course it is the fault of the health care industry that Babs is an overweight out of shape as wide as she is short moron that blames everyone else except her own physical condition. GOOD RIDDANCE you freakin moron!!

Frankly, I have had enough of this bitter dimwit, anyway. What a parasite.

Marvelous! It's looking more and more like these 'rats are seeing the handwriting on the wall, and are fleeing with their campaign funds intact. That's OK by me, so long as they're GONE ! ! !

Mikulski to retire? Sounds too good to be true. If it is then that should clear the way for a really great man to win the "peoples seat" in Maryland. Eric Wargotz, M.D., a physician, commissioner, conservative and independently minded republican with a strong grounding in the constitution, will be an excellent US Senator!