A Reminder: Which Republicans Voted To Confirm Eric Holder and His Terrorist-Supporting Appointees in the DOJ 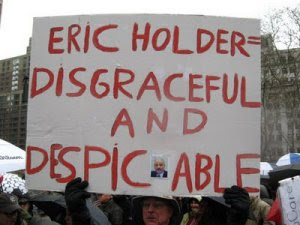 This comes on the heels of Holder's outrageous failure to prosecute the New Black Panthers who intimidated voters at a Philadelphia polling station in 2008.

And Holder, of course, had a catastrophically poor track record that should have clearly warned Congress against his confirmation: he had helped free FALN terrorists for Bill Clinton in an apparent quid pro quo; he had approved the pardon of fugitive financier Marc Rich after his wife had donated millions to Bill Clinton; and he'd had deep involvement in a variety of other situations that should have disqualified him instantly from holding any public office.

Last August Michelle Malkin helpfully reminded us of the list of Republicans who had voted to confirm Holder:

Voinovich and Specter no longer count, of course, as the former has retired and the other switched his affiliation to the Party of Weakness.

The usual suspects -- Susan Collins, Lindsay "Goober" Graham, John McCain and Olympia Snowe Job voted for Holder -- along with a bunch of more solid Republicans who definitely should have known better. It's high time this foursome left the Senate permanently, replaced by true conservatives.

Appreciate this wonderful reminder of who should be considered derelict in their duties to perform copious research and vetting, prior to giving away such precious votes. Both of my Senators are still considered derelict in voting in the current malfeasant AG, the (Pro) Coward Eric Holder. I would like for all our AZ constituents and more importantly my AZ Tea Party colleagues to remember both John (Juan) McCain and Jon Kyl as both derelict in their duties for voting in Holder. McCain is currently in for the fight of his political primary life against JD Hayworth.

We must continue to apply the Citizen pressure on the removal of all State and Federal incumbents.

Thanks for the vine.

More reason why the voters have not believed the GOP's claims to be a conservative party since 02. The 2 men(?) on you list of 4 are "the leaders" of the party.
With collectivist "leaders" like this do you really, honestly think the GOP will take back either hous this year?
Fat chance!

Rod -- is that really you again, Goober?

I suggest you ask Senator Scott Brown of Massachusetts that question.

We're taking over the GOP, if you hadn't figured that out yet, Einstein.

Don't let the door hit you on the ass on your way out.