Auto repossession specialists recovered 1.9 million cars in 2009, a jump of nearly 10% over the previous year. The increase is tied directly to the use of exotic technology used by police and repossession vehicles. Oh, plus the outstanding economic recovery orchestrated by our beloved Democrat leaders. 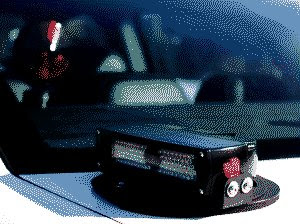 At the core... is a set of high-speed digital cameras mounted on the hood and trunk of a vehicle that snap pictures of license plates while passing other vehicles, even at 80 miles per hour. Photos of the plates (including the time the photo was taken and the car’s GPS coordinates) instantly pop up on a laptop computer inside the repo man’s vehicle. Optical character recognition software converts the plate numbers to text.

The process gets more technical: the plate numbers are checked against an encrypted database of delinquent cars, compiled from lenders and stored on the computer, which is refreshed continuously using a wireless link. In most cases, the license plates photographed are attached to cars with no payment problems. But when a plate on a wanted list is found, the computer screen displays further information, including the make and model, its vehicle identification number, or VIN, and the name of the lender. The data is used to confirm that the right car has been found — scofflaws sometimes swap license plates, for instance.

The plate-recognition systems are also used heavily by police. And the system resembles nothing so much as a "Big Brother"-ish system of the sort Orwell would have appreciated. 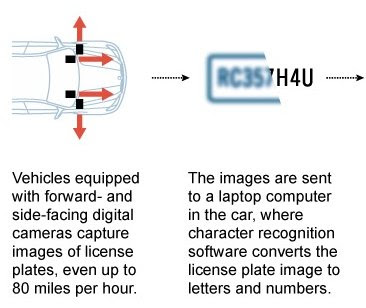 ...In their short time on the market, the camera systems sold by MVTRAC, Recovery Tech and others have upended the way repo men do their jobs. Instead of visiting a long list of addresses where a car might be, repossession agents are driving through parking lots, shopping malls and neighborhoods in search of wanted vehicles...

Police departments around the country now use the plate-reading technology to identify stolen cars. Instead of manually typing plate numbers into a computer, officers on patrol can check thousands of cars against stolen car databases as they pass them on the street.

MVTRAC’s early use of the technology depended on some 8,000 fixed cameras placed in parking lots, toll plazas and other busy spots. The company has since moved to mobile cameras because they let repossession companies spot the cars and recover them more quickly.

I've been told by an industry insider that, of the 100,000 total cars on wanted lists, roughly 40,000 are luxury makes like BMW, Mercedes and Lexus. 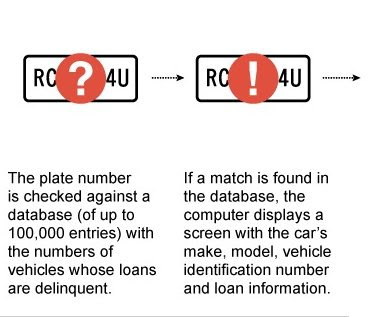 The reason lenders are willing to pay repo fees of up to several thousand dollars per car on investigating and repossessing is that the average amount owed on a loan is $26,000. Of those fees, the firm performing the actual physical repossession can swing about $200 to $400 for each car they find.

A subscription for MVTRAC’s camera and computer system runs about $600 a month, so it only takes about two cars spotted with the system to pay for it.

The implications of a national database of automobile movements is interesting and perhaps a bit troubling. The ability to query the database for Amber Alerts and other situations involving random vehicles is on the way. 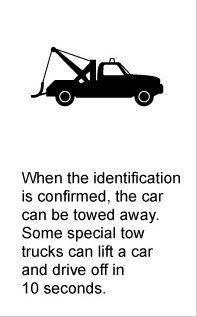 For example, a police officer notified that a kidnapping took place with the suspect reported to have been driving a blue Caprice could query the national database.

The officer could simply call up a list of all blue Caprices spotted in a specific geographic area during the time in question.

In addition, the path of a vehicle could also be deduced: a query could find all blue Caprices that were spotted moving from county A to county B over a certain period of time.

The industry specialist indicates that all 50 state DMV offices tie into the National Crime Information Center (NCIC) through a system called Nlets.

Using this approach, information between law enforcement and tracking firms can be shared, though where exactly the privacy lines are drawn will be established in court someday soon, I'd guess.

Your dig at the Dems spoils an otherwise informative article.

Lee, I won't be silent as Democrats destroy my Constitution and my country. Not while they bankrupt our children and destroy our currency.

The Soros-controlled, hard left Democrats are antithetical to our founding.

In fact, our founders wouldn't recognize what this egregious crew has done to our country.

It was the Bush administration that pushed this type of technology under the guise of catching terrorists.

The Bush administration also had data centers built to monitor your Internet traffic.

There are technology blogs that do have somewhat conservative editors. T

I would recommend http://www.dailytech.com/ . Some of there editors are global warming skeptics, but you will find links to factual information to support there views. Information that has never been mentioned by anyone in congress or Fox news.