The Cartel: The Education Disaster in America

If you have any interest in America's kids, this looks like a must-see movie.

Only 35 percent of American high school seniors are proficient readers. Only 23 percent are proficient in math. Nationwide, only 74 percent of ninth graders graduate within four years—and that number drops to about 50 percent for black and Hispanic students. Twelve percent of American high schools are “dropout factories”—schools where less than 60 percent of freshmen even make it to their senior year. It comes as no surprise, then, that America lags far behind other developed countries when it comes to schooling: Among large industrialized countries, America ranks last in educational effectiveness—despite spending the most. 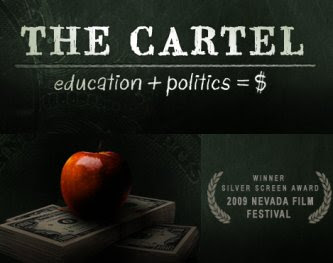 The conventional wisdom says that our schools could be dramatically improved with better funding. If we would only “invest in education,” the argument goes, our children would have a better future—particularly in urban areas, where leaky roofs, under-qualified teachers, and outdated textbooks are all too common

And so the last few decades have brought an explosion of education spending, enthusiastically approved by local school boards and state legislatures and generally supported by taxpayers. That’s the moral cover under which our public school system wastes and steals billions of dollars every year.

New Jersey offers a dramatic instance of this corruption and improvidence. After New York, no other state spends as much per pupil—but the Garden State has very little to show for its investment. Spending can exceed $400,000 per classroom, and yet only 39 percent of the state’s eighth-graders are proficient or advanced readers, and only 40 percent of its eighth-graders are proficient or advanced in math. Of new high school graduates attending the state’s community colleges, nearly 80 percent require remediation. More than three quarters of New Jersey’s high schools have been warned that they may be placed on the state’s list of failing schools. And the problem is not one of inadequate funding: Some of the worst schools receive—and squander—the most money.

This costly, unconscionable failure forms the subject of The Cartel.

Find out more at http://TheCartelMovie.com.

at 10:05 AM
Email ThisBlogThis!Share to TwitterShare to FacebookShare to Pinterest
Labels: Crime, Democrats, Education, Unions

One of the things a dictator does when taking power is to kill or imprison the educated, thinkers and authors that oppose them. The current plot is to keep the numbers of the educated to a minimum.