No Joke: Obama's Social Secretary Leaving To Do Stand-Up

White House social secretary Desiree Rogers is stepping down three months after an uninvited couple crashed the Obama administration's first state dinner and she was heavily criticized for her role in allowing the embarrassing episode to happen.

Rogers' handling of the Nov. 24 state dinner came under fire after a celebrity-seeking northern Virginia couple got into the exclusive South Lawn affair without a formal invitation, despite heavy White House security. As social secretary, Rogers was in charge of the event. 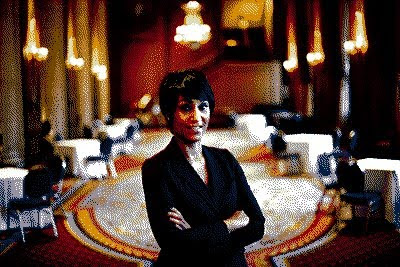 Rogers, 50, told the Chicago Sun-Times on Friday that she was leaving because she had achieved a major goal of the Obamas: turning the White House into the "people's house" by opening it up to many of those who normally do not get to visit.

What's the emoticon for a rimshot?

Poor thing has most likely been working 24/7! The non-stop partying inhabitants of the White house evah, have run her ragged?

You're also not smart enough to know that it's: I wish I were, not was.
I'm speaking of your last paragraph under the asterisks that begins: "And no, although I wish I was,

Look up the subjunctive mood verses the indicative mood.

I guess it's too much to ask a writer to know how to use the English language correctly.

I'll let Dan from New York know since, as I mentioned, he wrote the piece.

Don't let the door hit you in the ass on your way out.