Sean sends in an eye-witness report:

As one who worked natural disasters here in the US, Hurricane Andrew and the Northridge earthquake, I understand how frustrating it is when you want to help and you run into government red tape and agency power struggles. A foreign country would be intensely more frustrating as you will read in this report. Also, as is stated in this report, be very careful to whom you donate money for these disasters. It is very disappointing to see how very little actually gets to the victims who need it the most. 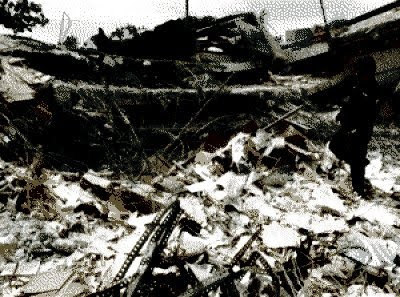 I just returned from Haiti with #########. We flew in at 3 AM Sunday to the scene of such incredible destruction on one side, and enormous ineptitude and criminal neglect on the other.

Port o Prince is in ruins. The rest of the country is fairly intact. Our team was a rescue team and we carried special equipment that locates people buried under the rubble. There are easily 200,000 dead; the city smells like a charnel house. The bloody UN was there for 5 years doing apparently nothing but wasting US taxpayers' money. The ones I ran into were either incompetent or outright anti-American. Most are French or French speakers, worthless every damn one of them. While 1,800 rescuers were ready, willing and able to leave the airport and go do their jobs, the UN and USAID (another organization full of little Obamaites and Communists that openly speak against America). These two organizations exemplified their parochialism by:

USAID, when in control of all inbound flights, had food and water flights stacked up all the way to Miami, yet allowed Geraldo Rivera, Anderson Cooper and a host of other left wing news puppies to land.

Pulled all the security off the rescue teams so that Bill Clinton and his wife could have the grand tour, whilst we sat unable to get to people trapped in the rubble.

Stacked enough food and water for the relief over at the side of the airfield then put a guard on it while we dehydrated and wouldn't release a drop of it to the rescuers!

No shower facilities to decontaminate after digging or moving corpses all day, except for the FEMA teams who brought their own shower and decon equipment, as well as air conditioned tents.

No latrine facilities, less digging a hole. If you set up a shitter, everyone was trying to use it.

I watched a 25 year old Obamaite with the USAID shrieking hysterically, berate a full bird colonel in the Air Force because he countermanded her orders whilst trying to unscrew the air pattern. " You don't know what your president wants! The military isn't in charge here! We are!"

If any of you are thinking of giving money to the Haitian relief, or to the UN, don't waste your money. It will only go to further the goals of the French and the Liberal left.

Bad place, bad situation, but a perfect look at the new world order in action. New Orleans magnified a thousand times. Haiti doesn't need democracy. What Haiti needs is Papa Doc. That's not just my opinion, that is what virtually every Haitian we talked with said. The French run the UN and treat us the same as when we were a colony. At least Papa Doc ran the country.

Oh, and as a last slap in the face, the last four of us had to take US Air home from Phoenix. They slapped me with a $590 baggage charge for the four of us. The girl at the counter was almost in tears because she couldn't give us a discount or she would lose her job. Pass that on to the flying public.

Figures. If the UN is involved, odds are a hundred-to-one it's also a criminal operation.

at 10:50 PM
Email ThisBlogThis!Share to TwitterShare to FacebookShare to Pinterest
Labels: World