Galt-meter hits the red zone as half of U.S. households escape all federal income taxes 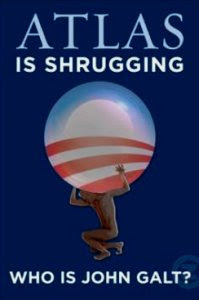 The result [of recent changes] is a tax system that exempts almost half the country from paying for programs that benefit everyone, including national defense, public safety, infrastructure and education. It is a system in which the top 10 percent of earners — households making an average of $366,400 in 2006 — paid about 73 percent of the income taxes collected by the federal government.

The bottom 40 percent, on average, make a profit from the federal income tax, meaning they get more money in tax credits than they would otherwise owe in taxes... "We have 50 percent of people who are getting something for nothing," said Curtis Dubay, senior tax policy analyst at the Heritage Foundation.

...Obama's Making Work Pay credit provides as much as $800 to couples and $400 to individuals. The expanded child tax credit provides $1,000 for each child under 17. The Earned Income Tax Credit provides up to $5,657 to low-income families with at least three children.

There are also tax credits for college expenses, buying a new home and upgrading an existing home with energy-efficient doors, windows, furnaces and other appliances. Many of the credits are refundable, meaning if the credits exceed the amount of income taxes owed, the taxpayer gets a payment from the government for the difference.

Interesting: I didn't know a "tax credit" was the new name for welfare.

An Army of Galts is growing.

misbyDoug the system works as designed. It's called a progressive tax system - you know, been around since Lincoln.

You should read a guy named Adam Smith... perhaps you've heard of him?

"The necessaries of life occasion the great expense of the poor. They find it difficult to get food, and the greater part of their little revenue is spent in getting it. The luxuries and vanities of life occasion the principal expense of the rich, and a magnificent house embellishes and sets off to the best advantage all the other luxuries and vanities which they possess. A tax upon house-rents, therefore, would in general fall heaviest upon the rich; and in this sort of inequality there would not, perhaps, be anything very unreasonable. It is not very unreasonable that the rich should contribute to the public expense, not only in proportion to their revenue, but something more than in that proportion."

The system you describe and subtly mock as being somehow bad - is not. It's civilized.

"the system works as designed"

While Doug, I, and millions of other taxpaying Americans are forced to pick up the cheaters, looters and pillagers tab.

Now do you understand our anger?

What you, how shall I say, conveniently overlook is the redistribution of wealth. It's not just a larger portion of tax for the rich, it's that the money the rich put into the system is being directly handed over to the poor. That's not a tax, it's wealth redistribution with the IRS as the middleman.

Tax exemption for the impoverished is civilized. Taking from one and giving to another with no labor or contribution required of the recipient is flat out communism.

Anon #1, Let's take what you say at face value. Therefore, given the percentage of people getting rather than contributing, around 40% of taxpayers are "poor".

Sorry, chuckles, if 40% are impoverished, there's a problem with the definition.

Her's a thought - let's get government out of the way, so people can support themselves rather than the bureaucracy. Let's try something with a chance of working.

Thank You for Posting This! I love your blog!!