Global Warming: Two Photos That Prove It's a Scam

Gee, that Arctic sea ice really seems to have thinned out over the last thirty years. Not. 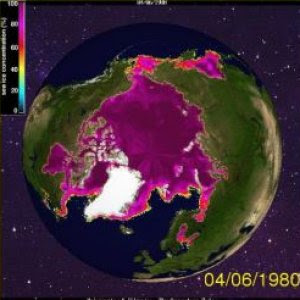 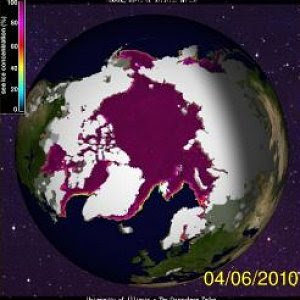 Another warmist in the Arctic: GE sponsors 15-year-old on polar trip... Shortly after twice reporting a temperature of -34 C, he suggests that the ice is “falling apart” around him.

Parker Liautaud, 15 years old, is reporting on his progress skiing his way to the North Pole. He has made his goal to become the youngest person to ski to the North Pole, and to use that attempt to bring greater awareness to the urgent environmental issues of the arctic.

And more importantly for his purpose of letting the world see the ravages of global warming on the arctic - There was a lot of open water today. It really shows what’s been going on in the Arctic – it’s falling apart. Right now we’re camping on this patch of old ice, but all around us is open water, broken and thin ice. To our north there’s a massive pan of very thin ice. Everything is freshly frozen, if not open.

...I always like to encourage young minds in science, but this is just a glorified field trip with a guide. What a bunch of suckers GE is for paying for such an expedition.

The ice from Cryosphere Today looks better than 30 years ago.

GE is anything but a bunch of suckers, Anthony. They appear to be little more than crony capitalists, taking advantage of the new swing to Statism by the Democrats in power. They're doing so using nationalized health care and the environment, for starters.

And, in the case of global warming climate change, not only is it economically disastrous for the United States, the entire concept is a shameless scam designed to -- surprise! -- redistribute wealth.

The satellite photos tell us everything we need to know.

It might help your readers if you explained what we were seeing.

What are the comparisons of the two photos that we should be focusing on?

Do-it-yourself climate assessment. Accurate calculation of average earth temperature for at least 114 years and counting with no need whatsoever to include the effects of change to the level of atmospheric carbon dioxide or any other greenhouse gas. See how at sc25.com.

If extent - area - were the only metric that was important, you might have a point.