I like to call it "money-printing", but the Fed calls it "QE2". That is, the recently announced second round of quantitative easing. Also known as monetizing the debt.

And a "huge list of investors and economists" are decrying the policy, going so far as to publish an open letter in today's WSJ. 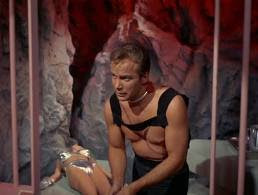 We believe the Federal Reserve’s large-scale asset purchase plan (so-called “quantitative easing”) should be reconsidered and discontinued. We do not believe such a plan is necessary or advisable under current circumstances. The planned asset purchases risk currency debasement and inflation, and we do not think they will achieve the Fed’s objective of promoting employment...

We subscribe to your statement in the Washington Post on November 4 that “the Federal Reserve cannot solve all the economy’s problems on its own.” In this case, we think improvements in tax, spending and regulatory policies must take precedence in a national growth program, not further monetary stimulus...

...We disagree with the view that inflation needs to be pushed higher, and worry that another round of asset purchases, with interest rates still near zero over a year into the recovery, will distort financial markets and greatly complicate future Fed efforts to normalize monetary policy...

In other words: Stop using monetary policy to dictate fiscal policy! Use your bully pulpit and tell the President and his minions to slash the five trillion they've added since Pelosi took over the budget!

At least that's how I read it.

Your bonus hyperinflation chart o' the day is below. It depicts the price of gold in Reichsmarks during Germany's fateful five-year run ending in hyperinflation and economic destruction. 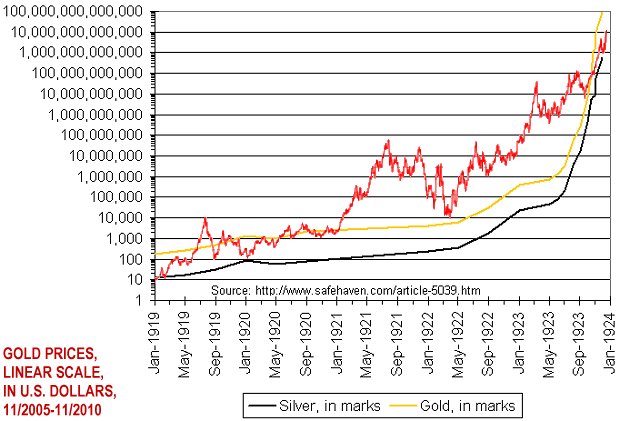 If the dollar does indeed melt down, I propose we call the new currency the quatloo (as in "I bid 50 quatloos on the newcomer"). Or the bernanke.

Why show a LINEAR scale of current gold prices on top of a LOGARITHMIC scale from the 20's? The truth is bad enough without playing tricks with the chart.

Quite a trick. I stated twice that the modern chart is linear.

This is deceiving and irresponsible.

If wealth can be created just by printing (or clicking in this case) currency and give it to the government to spend into a real-life physical economic world of people’s blood and sweat, then there is no need for industry, for tax collection, for education, for creativity and innovation. Wiemar Germany would not need to elect Hitler to solve problems, and no nation or empire would fail.
Can Bernanke the 'genius' overlooked this little fact just like Greenspan forgot that self-regulation is an open invitation to fraud?
Quantitative easing

Good news: former President Obama got his face on the new quarter.

(x4)<^12; significantly so. What is the point of the chart?? You would be a great addition to the global warming lobby with your misleading chart making super powers.

This is why keeping our eyes on gold and silver right now are very important.

One of the reasons for QE is that it is benefiting the banks in when it comes to interest payments.