World's dumbest blogger not sure why deficit reduction is needed

Matthew Yglesis is one of the country's top progressive bloggers and is also highly confused by all of the talk about deficit reduction. Which actually says quite a lot about the progressive movement. But I digress.

All the hot bloggers and think tanks are working on their long-term deficit reduction plans, but I have to say I’m a bit confused as to why. It’s definitely true that in principle a country should always have a specific plan for returning to long-term balance. But does that ever actually happen?

...Today we have serious economic problems, but none of them are caused by the deficit. Inflation is below the Fed’s target....

Here's a news flash for the world's dumbest blogger: inflation is a problem and it is being exacerbated by the out-of-control fiscal policy of the Federal Reserve. You've heard the term "monetizing the debt", genius? Do you know what that means?

It means we're intentionally devaluing the dollar in an ill-fated attempt to kick-start the economy because the government is flat broke.

So inflation isn't a problem? 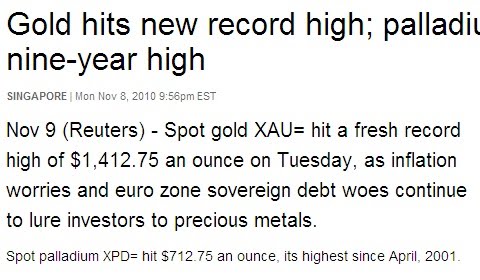 This is what passes for informed commentary on the left. Inflation isn't a problem, yet the price of oil, gas, food, commodities and every other tangible necessity is skyrocketing.

Gold is quickly becoming the world's reserve currency as the dollar's value becomes closer and closer to that of the Zimbabwean dollar.

We're about to open the door on the Weimar Republic and the leftists don't have a freaking clue. But that really shouldn't surprise me, given their exceptional track record of fiscal destruction.

After a year and a half of planning and preparation I'm at the last stage of moving to higher, drier, safer ground; I feel sorry for those who have no idea what is about to hit them up-side head.

Poor things trapped in a Ruling Class Echo Chamber are about to find out what it means to be stuck-inside-a-collective-chamber-of-credentialed-idiocy.

Why put actual thought, reason and analysis into an opinion when it is so easy, convenient, and widely media-accepted to simply blame George W. Bush?

Seriously. The leftists do not bother because they are simply not required to do so.

Uranium yellowcake prices are also ramping up and hitting new highs on the stop market as hedge firms are buying and world consumption grows.