A Completely Unrelated Series of Events

Observe the master at work:

As much as $37 billion from federal bailout loans to American International Group Inc. has gone to investment banks including Goldman Sachs Group Inc., the firm Treasury Secretary Henry Paulson used to run... 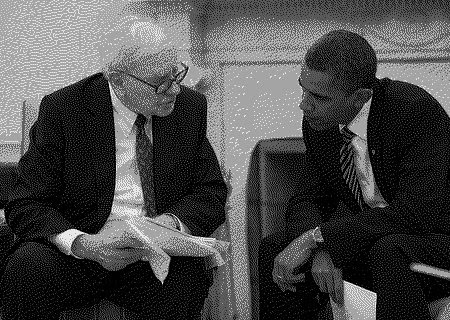 ...Without the government money, Goldman, Merrill Lynch & Co., Morgan Stanley, Deutsche Bank AG and other firms could have become some of the biggest creditors in a bankruptcy filing by AIG, the world's largest insurer, because of its billions in losses on subprime bonds and corporate debt.

One year ago today, on September 23, 2008, with the financial world still reeling from the collapse of Lehman Brothers just days before, Buffett stunned Wall Street with a massive vote of confidence for Goldman Sachs..

Goldman agreed to pay Berkshire a 10 percent annual dividend on [Buffet's] preferred stock. That's $500 million a year, and the payout didn't depend at all on what happened to Goldman's common stock price... But there was more. In what Buffett later described as a "bonus," Goldman also gave Berkshire the right to buy $5 billion of common stock at $115 a share...

The bonus has turned into big bucks.

Kids, can you say "Crony Capitalism"?

They also gave a Presidential Medal to the former head of the AFL - CIO.

Just like the NOBEL, the likes of Obama and the Democrats are turning another award into a meaningless nothing.

How about the HOLDER - Obama Department of JUS-TICE, has flopped dramatically with a predictable embarrassment in NYC - having an admitted terrorist basically dodging some 200 Charges?

The joke is on us all.

Ahmed Ghailani, the GITMO Detainee who admitted his guilt, a former Osama Bodyguard has proved just how embarrassing and misguided the Democratic Party is again.

They wanted to exploit for political reasons the Terrorists at GITMO, appease the Muslim Population in the World, return the GWOT to the disastrous Clinton Folly of this horror being merely a law enforcement matter.

Again, they fail, prove GW Bush's Administration had it right.

Change is a joke, just like 'smart power' as Hillary begs for the passing of this appeasement of Russia.

It is pure insanity.

The Democratic Party, which again selected Nancy Pelosi as their leader in Congress.

Now Mr. Ross, are you suggesting a true American icon, such as the Sage of Omaha, would somehow non-coincidently invest $5 bln in Goldman Sachs just 3 days after the former Chairman and CEO of Goldman Sachs and US Treasury Secretary, Henry Paulson, introduced a $700 Billion program called TARP? Really?

I mean, this is the same kind and gentle older American who's company is the largest investor in Moody's rating services that was hammering away at banks such as WaMu, causing a bank run that ultimately led to the government siezure of that bank.

Of course, coincidentally, that little old man's company is also the largest investor in Wells Fargo bank that received Moody's highest available credit rating as late as mid-2008. Of course, that didn't stop Wells Fargo from tapping into TARP for $25 billion just a couple months later. That seems odd for such a highly rated company, don't you think?

I don't think we all really understand how incestuous corporate America actually is. And government wants in on the relationship. Good job keeping your eyes on it.