Tyler Durden points us to a USA Today study of federal wages and benefits. Yes, we knew these people were completely out of control. But we didn't have a good picture of just how out of control they were and are -- until today (emphases mine).

For all those wondering how to cut down on government expenditures, here's a thought: cut the skyrocketing salaries! A study by USA Today, using US Office of Personnel Management data, confirms what has been widely known: that the biggest beneficiaries of government largesse over the past 5 years as a worker cohort, are none other than Federal workers themselves...

...Additionally, it appears that the bulk of the gains have taken place since Obama took office.

...The biggest pay hikes have gone to employees who have been with the government for 15 to 24 years. Since 2005, average salaries for this group climbed 25% compared with a 9% inflation rate... And just to make sure you get really angry, here is how one Federal Union views the fact that government workers as a whole are now the second best paid group after Wall Street:

National Treasury Employees Union  President Colleen Kelley counters that the proposed raise "is a modest amount and should be implemented" to help make salaries more comparable with those in the private sector.

Once again, we get confirmation that Americans always get nothing more or less than the thieves in control they deserve, and elect.

President Obama keeps talking about "paying for" the expiration of the Bush tax cuts. By that, he means keeping the same amount of your money flowing to the bloated federal bureaucracy to pay for these outrageous salary increases. 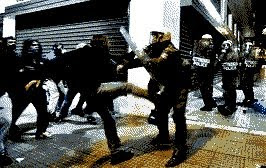 I've got an alternative: let's return the entire federal government discretionary -- non-defense -- spending back to 1999 levels. You know, when Clinton ran that budget surplus Democrats like to crow about (yes, I know, it was really the GOP House -- led by now Ohio Governor John Kasich -- who balanced the budget, but ***shhh*** humor them).

And let's outlaw public sector unions while we're at it. They are the enemy of a Democratic society -- one need only look at the riots in the streets of Europe for a preview of our future if these anti-taxpayers continue to feast at the public trough.

Sick to the stomach.

And still, there are the fools in Washington, California, New York, etc., who are voting for the disastrous Democratic Party.

It would sort of be like, having nearly everyone aware there is someone is poisoning the drinking water, and yet some go ahead and drink it anyway.

Hillary is going to hand 127 Million to the Palestinian Authority?

What a Authority?
And what a waste...

And this is why, getting control of the Majority in the SENATE was soooooo essential.

The folly of those embarrassing runs which only enabled the ugly Democrats in the Senate, can never be allowed again.

2012 is essential, and we simply have to end any Democratic Partisan influence if we are to survive.

and 98% of those listed live within commuting distance of Washington D.C.

When the cry goes out to "Cut the Federal Workforce", you can bet that 98% of those cuts will happen *outside* the D.C. corridor...