Anyone remember that exactly one year ago President Obama's original deadline for Iran expired?

Back in the halcyon days of hopeychange, newly minted President Barack Obama articulated his master plan for dealing with Iran. Mr. Peabody, set the Wayback Machine for May of 2009: 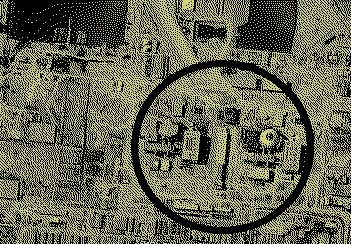 Obama said Monday that he would know "whether or not these discussions [with Iran] are starting to yield significant benefits" by the end of the year. In a White House press conference held by Obama and Israeli Prime Minister Benjamin Netanyahu, capping a 90-minute meeting today, Obama told reporters that he was against an artificial timeline but effectively created one. Obama offered a period from June, after Iran's domestic elections, to year's end "to see serious movement on the part of Iranians."

"We're not going to have talks forever," Obama said...

Just half of forever.

The president needs to show Arab states and Iran that he is demanding concessions from the Israelis...

Obama requires time to see whether his olive branch towards Iran bears, well, olives. Yet Obama's recognition that diplomatic progress must occur this year was tantamount to affirmation of Israel's concern, that the threat of a nuclear Iran requires immediate resolution.

Meanwhile, as Obama implies, Netanyahu could take significant steps toward the Palestinians--on settlements in particular. That would considerably aid Obama's outreach to Iran and the Arab world.

But -- as the Wikileaks disclosures make clear -- Israeli concessions have (and had) nothing at all to do with stopping Iran. Saudi Arabia and other Arab countries wanted Iran crushed -- as King Abdullah put it, "cut off the head of the snake" -- period.

Let me repeat: Obama knew all along that Israeli concessions had nothing to do with stopping Iran's march to nuclear weapons. Yet he persisted in linking the two, even though it raised the risk of an atomic conflagration that could engulf the world.

I'd like to know: does it get any more irresponsible than that?


Linked by: Instapundit, Michelle Malkin, Memeorandum and TAB. Thanks!

"Obama knew all along that Israeli concessions had nothing to do with stopping Iran's march to nuclear weapons. Yet he persisted in linking the two, even though it raised the risk of an atomic conflagration that could engulf the world."

LIKE pushing socialist Health Care on the USA, when we didn't want it, and the priority of ALL Americans was the economy.

Remember when Obama and Pelosi linked the economy to their dreadful socialist Health Care takeover? Remember when they said Obamacare would lower costs, create jobs, reduce the deficit?

Obama is just one of the many LIARS, who comprise the Democratic Party. Hillary Clinton today was a perfect symbol of excuses for the most foolish offering - while 'smart power' orders the collection of biometrics at the UN?

HEY, then there's PORTLAND:
"The FBI affidavit "was a picture painted to make the suspect sound like a dangerous terrorist," said Portland photographer Rich Burroughs. "I don't think it's clear at all that this person would have ever had access to even a fake bomb if not for the FBI."

What are they smoking there? If this young Terrorist killed many in Portland - these kooks would be saying the US Government did it.

Democrat insanity sinks us all.

"...does it get any more irresponsible than that?

Just depends on what your goals are, rather it's irresponsible or your plan. Screw the Jews was always Obama's plan.

Interestingly, most of the media ignored Iran's first nuclear plant entering operation (so they say) on Saturday: http://news.yahoo.com/s/afp/20101127/wl_afp/irannuclearpoliticsbushehr

BO is a Muslim, and he hates Israel. Has he lied about Israel and carried water for the Palestinians? Of course. He has no intention of attacking another Muslim country like Iran.

The only thing I can think of that Obama hasnt lied about was when he revealed his true feelings about Americans who don't shill for his agenda by referring to us as "enemies" who should be "punished".

That old Bush lied trope? Really, didnt jr say that Iraq had 100 million tons of chem weapons, that were never found? Was he lying or just completely stupid or a puppet for cheney? Attaching "Socialist" to the healthcare plan was great marketing by guess who? The healthcare industry that spent 487 million dollars to try to defeat it and Republican politicians bought and paid for. Why don't we call compulsory education "socialist"? Or forcing people to have valid driver's licenses? Whatever happened to all of those weapons of mass destruction jr ranted about for years and were never,ever found? You were suckered by warmongers who saw an opportunity to capitalize 9/11 to steal a country's oil reserve. And about Iran, don't you get it yet? Good cop/bad cop. Isreal, who is already hated by most of the middle east, will bomb Iran themselves with tacit approval from others. Try thinking for yourselves once in a while.