Here in the United States, the gargantuan public sector unions that control the biggest Blue States are -- by their own admission -- the vanguard of the Marxist left. Working in conjunction with the Democrat state political machines, the union bosses' interests are two-fold: (a) to harm the taxpayer; and (b) to eradicate the free market system.

Perhaps you think those statements are inflammatory. In that case, please consider the story "Ireland fears civil unrest as bank crisis deepens." 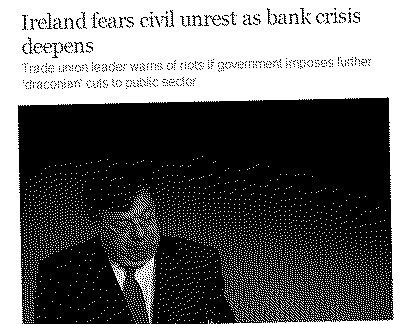 One of Ireland's biggest trade unions warned today that the nation was on the brink of civil unrest as government officials negotiated a multibillion euro bailout for the country's ailing banks...

...A first priority is to restore confidence and halt an outflow of cash – Anglo Irish Banks revealed on Friday that customers have withdrawn €13bn of deposits this year. Measures under consideration include hiving off rotten loans into a freestanding "bad bank"... ...Ireland's European allies fear that without swift action Ireland's debt crisis could become contagious, weakening confidence in Greece, Portugal, Spain and in the euro as a currency...

David Begg, general secretary of the Irish Congress of Trade Unions, said the union movement was calling for mass protests on 27 November to "allow ordinary working people to voice their opposition to a policy that could destroy 90,000 more jobs".

Consider this simply a preview of coming attractions in states like California, Illinois and New York, where the public sector unions rule the roost and have no interest in negotiating with the taxpayer.

If "civil unrest" and "civic disorder" is what the unions want to bring to the party, it must be met in kind and with overwhelming force by the balance of society.

Public employee unions can and must be busted.