What do the Ukraine and Pakistan have in common?

Their debt is rated the same as Ireland's.

Mary Ellen Synon, writing in The Daily Mail, offers an exceptional summary of Ireland's debt crisis which, you may have heard, is at a boiling point.

First the potato, now the euro: how Ireland has been destroyed again

...So what went wrong? No one in Brussels will ever admit it, but it's the euro that ruined Ireland.

Ireland joined the single currency in 1999. At the time it was enjoying healthy growth, fuelled by investment from high-tech multinationals such as Dell, Intel and Pfizer, attracted by Ireland’s low 12.5 percent rate of corporation tax.

But after the Irish turned over their currency and their interest rates to the European Central Bank in Frankfurt, things began to change.

The ECB insisted upon low interest rates for the eurozone to help the sluggish German economy. But what suited Germany was all wrong for Ireland, turning healthy growth into a debt-fuelled property mania.

First the Euro-enthusiasts across the EU fostered the idea that, since all the members of eurozone shared a single currency and had promised to adhere to strict limits on debt and inflation, they were all equal in risk... This fiction led investors to imagine lending to Greece or Ireland was no more risky than lending to Germany or the Netherlands.

So Irish banks were free to suck in billions from Asia and Europe... These billions - many of which came from the City of London - were what fuelled Ireland’s asset bubble. ECB policy made sure the money was lent on to Irish property speculators at real interest rates that were actually negative... [and] eager to cash in on ever-soaring property prices, the Irish began a credit binge that drove up levels of personal debt to the highest in Europe. 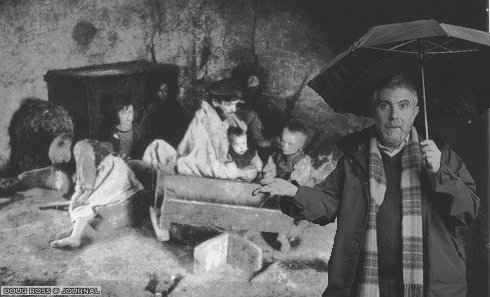 Meanwhile the Irish Government enjoyed a tax revenue bonanza - and responded by letting public sector pay and spending rip so that today Ireland has the highest paid public sector in Europe... In short, joining the euro has meant almost everything that could go wrong in one country has gone wrong in Ireland.

Then in 2007, the inevitable happened and the property bubble burst. Tracts of land bought for hundreds of millions of euros for commercial development became worthless overnight. House prices crashed to half their value and are still falling...

...Irish banks have been destroyed by their bad loans and are insolvent. The bond markets will not lend money to the Dublin government, which is itself insolvent, driven to the edge of bankruptcy by trying to save the banks.

One economist pointed out last week the markets now put Irish sovereign debt in the same risk group as Ukraine and Pakistan.

And all this could have serious repercussions for Britain... Worse, Irish bankruptcy could lead to a contagion of default on debt among the other weak members of the eurozone. Such a contagion could put the banking system here under serious threat, especially if the Spanish were forced into default.

...While Britain’s national deficit – the amount by which Government spending exceeds annual revenue -- is about 10 percent of national output (called GDP), Ireland’s is 32 percent, possibly the highest in the world outside Zimbabwe.

Here, like California, is the idiocy of Paul Krugman's policy prescriptions writ large. Everything Krugman advocates, limitless Keynesian spending and untold amounts of debt, has already occurred in California, Illinois and Ireland.

And they're all about to topple in a vertigo-inducing onslaught of defaults and debasements. Which is why Krugman won't ever talk about them.

Well, like the potato disaster...what happens in Ireland ultimately comes to America. So, is America about to go bankrupt as Ireland is heading?

I remember not too long ago when Ireland was described as 'the Celtic Tiger' due to it's economic leadership. What a sad turn of events.
I do want to offer one correction though, it wasn't so much the potato blight that killed so many Irish as it was a British engineered democide. Like in the Ukranian Holomodor there WAS food in Ireland, but the starving people were not allowed to have it, the food was exported out of Ireland by the British. The 'famine' was actually a genocide.

I belong to a group which seeks to raise awareness of the facts about the Irish Holocaust. Sadly, I could no longer stomach visiting the page because it got over-run with Irish marxists and anti-semites.

The very same Irish who railed against capitalism amidst a booming economy and clammored for Euro-socialism are now feeling the sting of their wishes fulfilled. These people are also jihadi sympathizers who hate Israel, even as Ireland becomes over-run with islamic supremacists just like the UK.

I am so thankful my ancestors chose to leave that place and come to America, now if only we could keep our country from suffering the same self-inflicted fate.