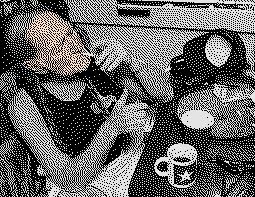 Country singer Willie Nelson has been charged with marijuana possession again after six ounces was found on his tour bus in Texas, according to U.S. Border Patrol Services.

Patrol spokesman Bill Brooks says the bus pulled into the Sierra Blanca checkpoint Friday morning. When the door opened, an officer smelled pot, triggering a search and the discovery of marijuana... Nelson was among three people arrested by the local sheriff.

The 77-year-old singer is an unrepentant marijuana user and he's been busted before... Back in 2006, he was also charged with a misdemeanour after being found with marijuana and mushrooms. He paid a fine and was put on six months' probation...

Some headlines are so unsurprising you wonder why the media even bothers.

at 1:17 PM
Email ThisBlogThis!Share to TwitterShare to FacebookShare to Pinterest
Labels: Art, Crime

Yes! God forbid the border agents be allowed to arrest known illegals and drug gang members pouring over the border. Nope this Willie guy, now he's a bad one.