Things are tough all over: Nicholas Cage's foreclosed house sells at less than a third of its original listing price

Actor Nicholas Cage lost his Bel-Air estate to foreclosure earlier this year. Two weeks ago, an anonymous buyer grabbed the mansion for $10.5 million in cash, less than a third of its original listing price.

The 1940 Tudor had failed to generate any bids in April when it was offered at the county courthouse steps in Pomona. Six loans totaling $18 million encumbered the house, which the actor had decorated in a style one local real estate agent dubbed "frat-house bordello." Among personalized touches were garish room colors, three dozen bronze wall sconce holders made from a cast of the Oscar winner's arm and hundreds of elaborately framed comic-book covers lining the walls. 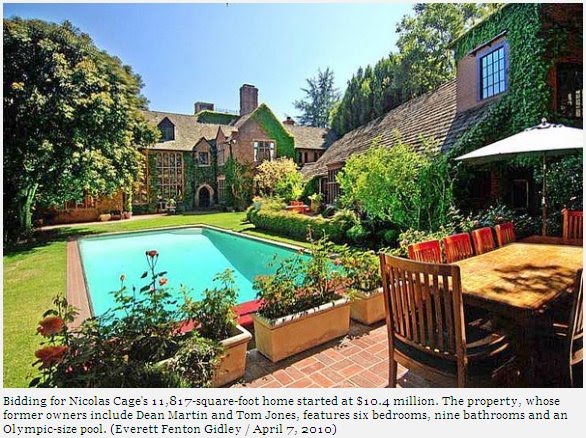 ...The Colcord-designed house sits on an acre, has a central tower, a custom wine cellar, a 35-seat home theater, six bedrooms, nine bathrooms and a swimming pool. 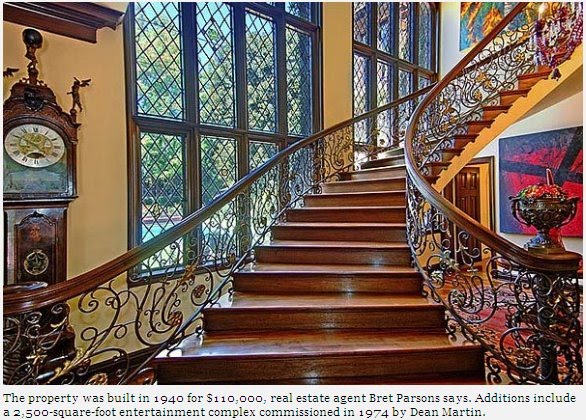 ...May Ormerod Harris, a major USC benefactor, commissioned the home; then it sold to banker Stanley Stalford in the early 1960s, Parsons said. Yuban-brand coffee heirs were the next inhabitants before the estate transferred to a series of celebrity owners: Dean Martin, Tom Jones and Cage...

Although Cage is reported to have earned $40 million in 2009 alone, he's suing his former manager for collecting outsized fees and giving ruinous advice. For his part, the ex-manager claims Cage engaged on a "spending binge of epic proportions", noting that in 2008 the actor had owned "15 palatial homes around the world, four yachts, an island in the Bahamas, a private Gulfstream jet and millions of dollars' worth of art and jewelry."

Doctor Housing Bubble observes that several banks, which had written $18 million in six different loans on the house, took a $7.5 million haircut on the deal.

Which goes to show you that no one -- not you or me, not a Hollywood actor, not even the richest and most prosperous country on Earth -- can spend beyond their means for long.

Which is a lesson the modern Democrat Party apparently never learned.