The Tragic Idiocy of Political Correctness

Glenn Reynolds relays a note from a reader who'd rather remain anonymous.

...My wife and I are the guardians of a girl who came from a home where we believe she may have been sexually abused or witnessed sexual abuse of her mother. Her father had abandoned their family and the mother had struggled to survive and eventually turned to prostitution with the child in the house. This all happened when she was a preschooler. She did the most disturbing things when she was taken from her mother and placed in our custody. For example, she had the habit of walking up to any random male who paid any fleeting attention to her, such as a pizza deliveryman, hug him, and say “I love you.” We, along with child therapists have worked with her since we’ve had her, and now, 5 years later, she is a very normal middle grade schooler. She is successful in school, has close friends, and is good at sports and music We are protective. We keep an eye on her, especially the adults she interacts with. 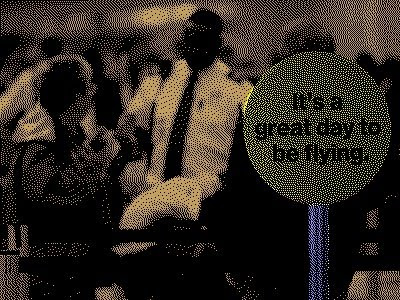 At this point I will not take her to an airport. How could I? I am unable to justify the risk of exposing her to a situation where not only would she would be forced to submit to a stranger fondling her genitals, but my wife and I would be forced, under threat of a multi-thousand dollar fine, to “force” our child to comply. I can’t imagine anything more threatening to her mental well being, and the fine we would have to pay to refuse might cost us our house. This means that until the situation changes, she will not travel by air. Fortunately, we have no plans to travel by air anytime in the near future. We did earlier in the summer, ,and so it was only by sheer luck that we did not have to eat three plane tickets.

So when I read Guy Winch suggest that airports have “a mental health professional on staff or available as a referral ” for the poor TSA agents who have to grope people day in and day out, all I can think of is that if anything, the airports should have a mental health professional on staff to handle the inevitable situation where a prior victim of sexual abuse is singled out, groped, and melts down right there in the airport security area. The TSA agents are not the people most endangered by this outrageous policy, and when I see videos of TSA agents strip searching children, it is obvious that the TSA has never considered the potential of what they might be doing or have already done to both child and adult victims of sexual abuse, some of whom may not be known to their parents or guardians.

Here's a really tough question: what prevents the TSA from simply pre-screening the vast majority of American airline passengers who represent no threat whatsoever?

• The family of four traveling to Orlando for their sixth vacation in six years?
• The frequent flier who has 100 segments piled up over the last 18 months?
• The DOD contractor with a Top Secret security clearance?
• The grandparents who fly to Florida each fall and back to Michigan every spring?
• The 18 cheerleaders flying to San Antonio for a competition?

The list goes on and on. These are the same big government addicts who want to control your physical well-being and ration health care using a vast database of electronic health records and a panel of advisers who recommend treatments.

Yet they can't figure out that Joe Fubar is a cleared defense contractor working on the F-22 Raptor. Or that Mrs. Beasley is headed to Phoenix for the 12th year in a row to visit her best friend.

So they end up giving each air traveler the colonoscopy they will routinely deny to seniors because of the "Complete Lives" formula. These Democrats are a freaking joke. A sad joke, to be sure, but a joke all the same.

"The Tragic Idiocy of Political Correctness"

And the nightmare known as the Democratic Party.

HEY, by the way, remember when Hillary Clinton bragged to the host of "On the Record", that North Korea could be dealt with - meaning appeased?

The nutty Dictatorship not only sunk a South Korean Ship on the "smart power" watch of Obama and Clinton, they are truly becoming NUKE scary.

Does Hillary Clinton get called on the flops with North Korea, Russia, Iran, or the enormous failure with Israel - Palestine?

She always gets a pass...

DNC Titanic still sinking us all.

I can't wait until a crowd of angry passnegers witnesses a grotesque groping of a woman and somebody just flips out. The TSA then manhandle this passenger, then another comes to his aid, followed by a mass riot where the passengers overwhelm the TSA agents. What fun.

What has our society become that nobody has come to the defense of any of the children or old people who have been accosted by TSA agents. My dad was a fifties guy, I can tell you that if he were alive and saw someone groping a screaming child or fondling an old person,making them remove prosthetics and stuff, he'd have been serving up knuckle sammitches. Most men of his generation would have even say 20 years ago. But now? Everyone just stands watching, idly waiting for their turn to get irradiated for nudie picks or have a gloved thumb jammed down their pants. It ain't just chivalry that's dead, it's common decency and standing up for what's right that's long in the coffin as well.

Failure to profile is another example of why the TEA party exists: the government allowed 9-11 to happen by not 'connecting the dots' and now refuses to apply any common sense profiling to let business travelers like me fly. Cause a housing crisis, make it worse with loan guarantees. National cash flow and debt problems? Borrow $3B from Asia, destroy 690,000 cars, then encourage 690,000 people to take out loans to but (mostly) Asian cars.

We want our government to be like fire fighters: spend their days practicing driving big shiny trucks and having barbecues. In return for the minor inconvenience on the road and the easy 9 to 5, we expect them to be there when we need them.

Not this government: we have a crowd in power that prefers to create fire hazards, then takes pains to let them burn for maximum effect, just to justify taking more of our money because fires are really big and scary.

The TSA saga is nothing more than a battle for 'control'. The American public will be conditioned and compelled to comply....they will not ask questions, nor object to anything offered by their magnanimous guvmint.

Think I am wrong? Proof of the above is abundant but no more so in the case of the traveler who was selected for a groping..errr..sorry, I meant 'enhanced pat down'. So he stripped to his underwear right there in public and was told he must must put his clothes back on so they could complete the pat down. Refusing to do so, he was frog marched through the terminal in his undies. Now...tell me again how this isn't about submitting to authority?