'I haven't stolen enough to afford a lawyer!' -- Accusations that racism is behind Rangel's convictions to begin in 3... 2...

Longtime Democrat crook Charlie Rangel was convicted on 11 of 13 ethics charges today despite his claim that he'd had only two years to prepare a defense.

Harlem Rep. Charlie Rangel did break the rules and was convicted this morning of 11 of the 13 ethics violations leveled against him by a House panel. The decision came a day after the 80-year-old lawmaker and former chairman of the Ways and Means Committee walked out of the proceedings to protest his lack of a lawyer.”

Devil is in the punishment details, of course. 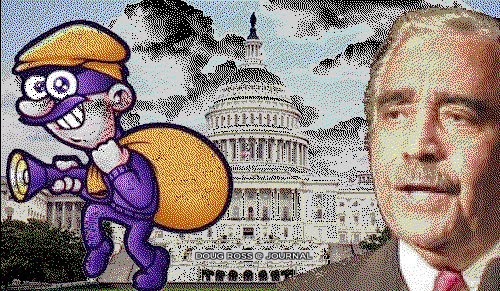 ...Flashback: The House Ethics Committee is a corruption-enabling cesspool

...the 79-year-old congressman has given campaign donations to 119 members of Congress, including three of the five Democrats on the House Ethics Committee who are charged with investigating him...

...Charlie’s “angels” on the committee include Congressmen Ben Chandler of Kentucky, G.K. Butterfield of North Carolina and Peter Welch of Vermont. All have received donations from Rangel.

If the system were working correctly, Rangel would be wearing an orange jumpsuit and breaking rocks in Leavenworth.

As it is, he'll probably retire in a few years with a full pension and all of the cash he's magically accumulated as a devoted public servant.

No matter what sort of slap on the wrist Rangel receives, expect the usual cadre of race hustlers to elbow each other out of the way to get some face-time on legacy media.

But everyone knows that things need to change in Washington. And race has nothing to do with it. Corruption does. And plunging the likes of Rangel, Waters and Feinstein out of the bowl represents only the beginning.

The obvious delay in the Democrats holding this ethics thing after the elections becomes even more vivid.

But everyone, all Conservatives should urge this CROOK to be removed from Congress, period.

The voices should be loud, and if they are, there is a chance the politicians will be nervous enough to actually pull the trigger on what needs to happen.

Rangel needs to go, a lesson for all these crooks.

They we should put Pelosi, Reid, Clinton, Etc. on trial as well.

And, re-elected! Like Boxer, Reid, Jerry Brown.. No wonder people are giving up on this system.

The more things change, the more they stay the same.

Good people can't find work, losing their homes so these bums can loot the country.

no matter what punishment he receives it's not even close to what you or I would receive for the same crimes, being a politician has it's advantages..