The ethics trial of Rep. Charlie Rangel (D-NY) is slated to begin tomorrow. Curiously, the Democrat leadership scheduled it to begin just after his reelection and just before control of the House flips over to the GOP in January.

Rangel is accused of violating more than a dozen ethics rules including failure to report huge financial transactions, failure to pay thousands in taxes, and drowning a woman at Chappaquiddick. Oh, wait -- that last one was a different Democrat. My mistake. 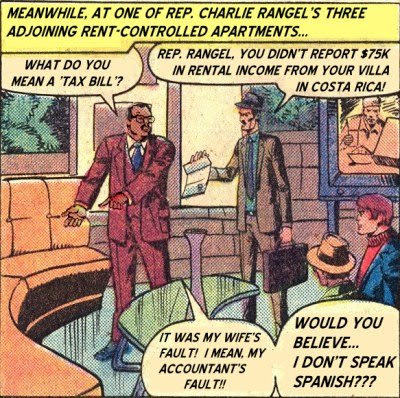 Two legal experts told The Post such spending is against House rules... "It's a breach of congressional ethics," one campaign-finance lawyer said... Washington, DC, political lawyer Cleta Mitchell said there is "no authority for a member to use leadership PAC funds as a slush fund to pay for personal or official expenses."

..."Accepting money or payment for legal expenses from any other source, including a PAC, would be a gift and is barred by the House rules," the lawyer said.

Rangel probably figures the ethics trial on these new charges won't take place until mid-November 2012, at which point he'll already have been reelected for the 75th time in a row.

That's exactly what I was thinking when I read it yesterday! LOL
Regarding the story that Democrat Congressman Charles "Cholly" Rangel raided his PACs for $393,000:
http://www.nypost.com/p/news/local/manhattan/rangel_raided_pacs_for_ZlQ9s68r9cadmFBXvTeq1K
Let me get this straight. "Cholly" breaks the House ethics rules so he can fund his defense against breaking the House ethics rule. Huh? Does anyone else see a problem with this??? Talk about your vicious circles...

Here's the thing though... he will walk. Again. He's walked for FORTY GODDAMN YEARS.

I have absolutely no faith in the idea that this ultra-corrupt government will actually punish one of their own, this icon of corruption and greed.

Bet you $ 20 the most he's going to get is a symbolic fine, equal to maybe 1/1000th of the funds he's defrauded us out of. Best-case scenario: acquitted on all counts.