It's Infidel-tastic! Fairmont Hotels Opens a Luxurious New Resort That You're Not Allowed to Visit

A Friday news item in Maktoob noted that some Islamic clerics are worried about overbuilding in the holy city of Mecca (Makkah).

Inside the mosque, all pilgrims are equal as they circle the black stone known as the Kaaba towards which Muslims around the world turn in prayer every day... But outside an array of towering five-star hotels have sprung up where the wealthy can bask in a 24-hour view of the Kaaba. The high-rises dwarf the mosque and the surrounding town, nestled in the mountains in the hinterland of the port city Jeddah... 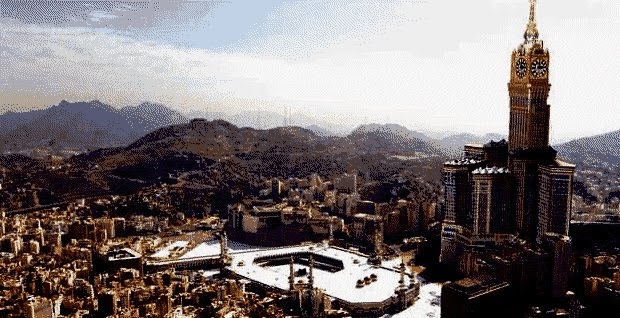 In recent decades many old houses have been torn down in Mecca to allow better access to the haram, making way for malls, hotels and huge underground parking areas. Locals are compensated for houses they lose... Irfan al-Alawi, an Islamic theology professor based in London, said the Vatican would never sanction such work in its own sacred precinct... The government should use space outside the city to build hotels, he said: "Mecca doesn't have to look like Manhattan or New York".

The grandest hotel of all is actually being constructed by a North American company -- Fairmont Hotels -- which is building the Makkah Clock Royal Tower.

I find it bizarre that the Fairmont organization would support this type of project in the apartheid city of Mecca. 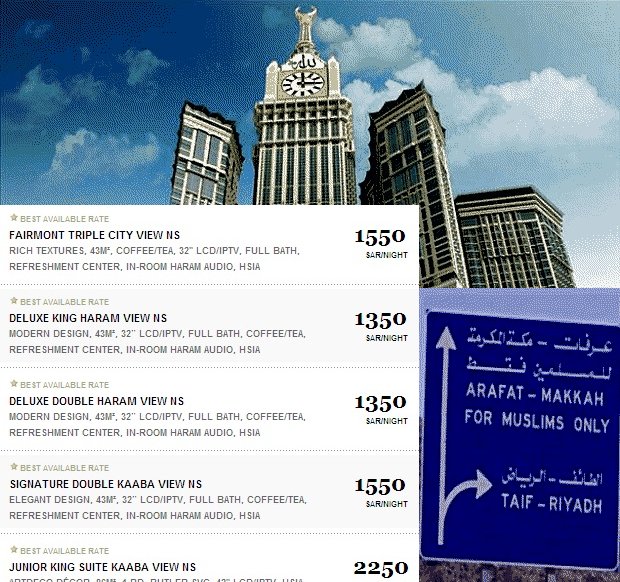 The Left always tries to paint Israel as some sort of "Apartheid State", even though every religion imaginable is practiced and Arabs serve in parliament and at all levels of government.

But when it comes to a true apartheid state, no country is more intolerant that Saudi Arabia. It bans the practice of all religions except Islam, treats women as fourth-class citizens, practices stone-age Sharia law, and bans travel to the holy cities of Mecca and Medina by infidels. That would be you, me and probably most in the Fairmont organization. 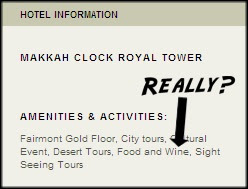 As an aside, you hard-line Islamic clerics out there may want to issue some fatwas on the Fairmont.

After all, their travel brochure for the Makkah resort includes alcoholic beverages among the amenities offered.

Of course, that sort of hypocrisy is pretty much accepted for the elite in Saudi Arabia, though it's usually not advertised so boldly. Especially in "Makkah".

Tolerating and supporting apartheid of the sort practiced in Saudi Arabia is especially depressing for a company headquartered in North America and doing business in many U.S. cities.

I know this much: I'll never stay at a Fairmont hotel again.


Linked by: American Thinker. Thanks!

at 10:44 AM
Email ThisBlogThis!Share to TwitterShare to FacebookShare to Pinterest
Labels: extremism, World

If you're surprised that an American company would support such a hotel, then you haven't learned a thing about globalism and international companies. Fairmont may have its headquarters in North Carolina, but its alliegence is only to its profits. Welcome to the modern world, you peasant writer who clings to personal values.

Thanks for the heads up--I'll never stay at a Fairmont Hotel either!

That reminds me of a hotel my friend Sam and I stayed in in Mordor on our way to unload a ring.

I'll offer 10 to your 1 that Barry and Michelle would be allowed to stay there...! Any takers?