You knew the Department of Homeland Security was broken under Janet "Don't call me Reno" Napolitano. She won't secure the border. She can't bring herself to name the religion that breeds an incessant flow of suicidal extremists. And now she may allow Muslim women wearing hijabs (full body coverings) to pass through security without the intrusive scanning process that the rest of the citizenry must endure. 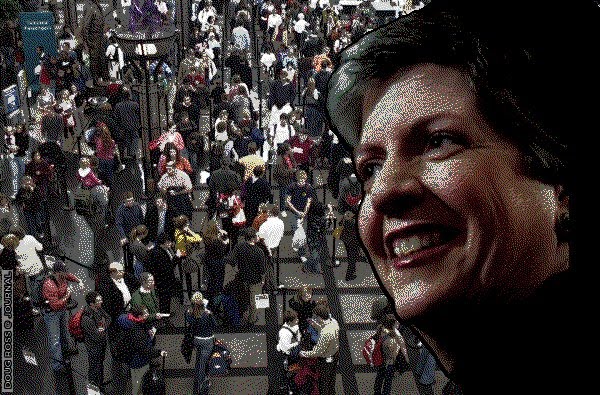 “Look, we have, like I said before, we are doing what we need to do to protect the traveling public and adjustments will be made where they need to be made,” Napolitano responded. “With respect to that particular issue, I think there will be more to come...

Let's see if I have this straight. There's a specific group of people that killed 3,000 innocents on 9/11; tried to detonate a shoe bomb on a flight; attempted to bring down airliners with liquid explosives; created parcel bombs in the hopes that they could rain airliners down on American cities; and also constructed undergarment bombs to slay men, women and children.

But Janet Reno Napolitano is considering "adjustments" to the security process for members of that very same group of people, using the recommendations of an extremist front group linked by the FBI to all sorts of skulduggery.

Maybe we should all wear hijabs to the airport.

They are nuts, pure nuts.

Wait until this fool has to testify in front of some very inspired Republicans soon.

Janet Incompetano has hit a real nerve with her BS. I predict she'll be gone by Jan 20th

here's the business I'd love to start...airportburkas.com - we would rent burkas at the airport to people who would don them before their encounter with TSA...the customer would turn them in at our counter upon arrival at their destination. We would rent them by the thousands, to men, women and children. And TSA, don't you DARE question our customers religious beliefs or profile them by language, accent, gender or anything else. Just give them that little forehead pat-down and wave them through....