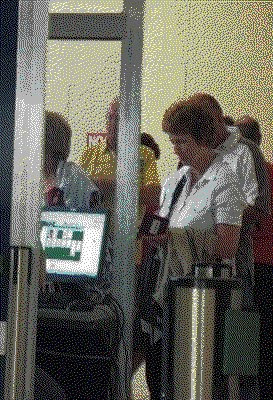 First Health Care, Next the Food Supply: AT
Shock: Far Left DOJ Crackpot Behind Christie Hit Job: GWP
Rangel: There is "No Evidence of Corruption": PunditPress

Palin: You Betcha, The Media Sure Should've Vetted Obama Instead of Fellating Him: Ace
My Very Own TSA Nightmare: PJM
The Heartless Lovers of Mankind: WashReb

Heartwarming Socialized Medicine Success Story of the Day : JWF
The World Economy Flounders: AT
Guantanamo Inmates: Pictures of Women in the Newspaper are Haraam!!: WZ

QOTD: "The Christian religion is a stranger to mere despotic power. The mildness so frequently recommended in the Gospel is incompatible with the despotic rage with which a prince punishes his subjects, and exercises himself in cruelty.

...While the Mahometan princes incessantly give or receive death, the religion of the Christians renders their princes less timid, and consequently less cruel. The prince confides in his subjects, and the subjects in the prince. How admirable the religion which, while it only seems to have in view the felicity of the other life, continues the happiness of this!" -- The Spirit of Laws, by Charles de Secondat, Baron de Montesquieu (1751)

Except we see Riehl is at it again?

As if anyone would listen to him after Delaware and his nutty ROVE conspiracy theories.

Riehl's delusional offering is a prime example of why the Democratic Party survives today.

On a break, I tuned into FOX, only to see Mr. Miller offering the same thing he rebuked and blasted after the Primary in Alaska. How comical the world turns.

Just as bizarre as the Democrats keeping Nancy Pelosi - which reminds me of the Delaware mistake on Our Own side. The Democrats are not only suicidal, but they want to take us all down with them.

But NOW, Miller wants to challenge the election, review the votes, lawsuits, etc., which he threatened on the contrary when he won in the Primary - and many of Our Own joined in on the hyperbolic offering back then. Reminds one of Kerry, against it, before he was for it.

This is another symbol, of just how misguided the fashion is on Our Own side. The loss of reason, the blowing with the fashionable echo games, the hyperbole weakening Our best effort - which has to focus on defeating the Democrats.

Not only was Miller revealed to be human - like any other politician (having abused a government job in his past) - but the Palin Franchise and the Tea Party Express could not even beat a write in Candidacy for the Senate in Sarah's back yard. Seeing the reality TV show, which the Hockey Mom claimed is not a reality TV show is even more ironic now. Alaska just rebuked the Palin Franchise and selected Murkowski as a 'write in' Candidate - only one other time in history has this happened, ever.

The fashion and hype is all about Celebrity, and far from truly conservative. And long ago, I wrote many of the finest in the blog world, concerned about their vitriol for a Republican with a 70% ACU rating - including the mighty Mr. Instapundit. The emails from the Tea Party Express and the Palin Franchise was awful - overtly personal and decidedly unfair. They all encouraged the opposite, unnecessarily growing opposition to the good cause. It was fashion, not conservatism driving the poor strategy and destructive demeanor.

Miller predictably flops, very similar to the Delaware fiasco, and the poor offering of Angle in Nevada.

Seeing Miller today, only reminded me of the hype and the fashion, which we have to grow beyond.

PS: Sorry for the rants - but here is more. A link not to be missed.

Sarah Says She Can Beat Obama

Uh, yeah, sure, that is just what O'Donnell said in Delaware - and some foolishly believed it.

Mrs. Palin was a principle player in the Maverick FLOP - and her offering today is purely based on IMAGE. She continues to push the most simplistic ploys to Our Base with the overt "freedom", "common sense", etc.

But she lacks a very important element, which gets revealed often, especially in interviews and when she abandoned her responsibility in Alaska - she lacks substance.

Last night on FOX, with Mr. Baier, she failed to answer a simple question about "cuts". Instead she talked about freezes on spending and hiring. She again, also unseemly hid behind the HERO named the GIPPER, referencing his early acting career, to make excuses for her Reality TV Show.

Mrs. Palin grew as a moderate reformer in the manner of the Maverick - appealing to Democrats and INDYs, by blasting the Republicans. She raised taxation on Oil Companies in a populist manner, and even created bureaucratic "Climate Panels" in Alaska.

Hardly the ideal offering which she plays on TV. It is wonderful for Conservatives to have a nice Celebrity, but this is going to be a bigger flop than Dukakis or the McCain-Palin ticket as a Nominee for the Presidency. Sarah Palin has clearly been influenced by the Celebrity, and has written many checks beyond her ability to pay for, ie: Miller, O'Donnell, etc.

She had great potential, but chose to sell a celebrity with "Realty TV" instead. She could have grown, but opted for the Image game.

Just as I said with the Maverick, Sarah Palin has less chance of winning a National Election than O'Donnell.

We best get the fashion to see reality, before it is too late, and we end up enabling Obama, Pelosi, Reid, Clinton, etc, yet again.