Oh, This is Rich: HuffPo Nut Can't Remember When Members of Congress Ever Met With Foreign Leaders Against the Will of the White House

Some crackpot named Amanda Terkel, writing at the execrable Stuffington Roast, is shocked -- shocked! -- that a member of the the House majority met with the Israeli P.M. 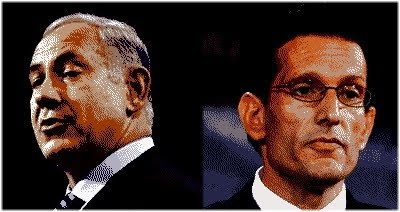 Rep. Eric Cantor (R-Va.) told Israeli Prime Minister Benjamin Netanyahu on Wednesday during a meeting in New York that the new GOP majority in the House will "serve as a check" on the Obama administration, a statement unusual for its blunt disagreement with U.S. policy delivered directly to a foreign leader...

...Ron Kampeas from the Jewish Telegraphic Agency news agency found Cantor's comments extremely surprising, writing, "I can't remember an opposition leader telling a foreign leader, in a personal meeting, that he would side, as a policy, with that leader against the president. Certainly, in statements on one specific issue or another -- building in Jerusalem, or somesuch -- lawmakers have taken the sides of other nations. But to have-a-face to face and say, in general, we will take your side against the White House -- that sounds to me extraordinary." 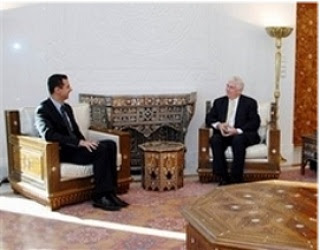 It's certainly easy to forget this meeting of Democrat Chris Dodd (D-CT) with Syrian dictator-slash-Iranian-terror puppet Bashar Assad against the wishes of the Bush White House. 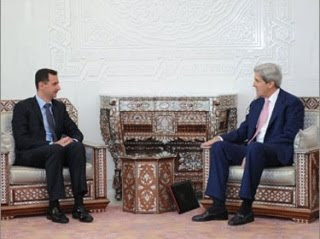 Or this meeting between the pathetic John Kerry (D-MA) and Assad. 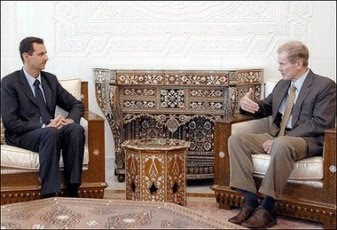 Or the time that the disgraceful Bill Nelson (D-FL) met with Assad. 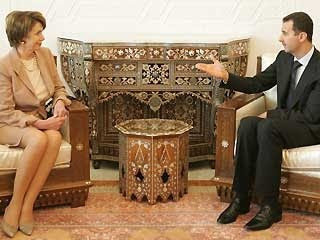 And who could forget this meeting between Stretch Pelosi and Assad?

Not only did Democrat leaders meet with the head of the terror-state; not only did they fly across the globe to meet; but they also did so in the midst of the Iraqi conflict in which:

• Syria was secretly building its own nuclear facility (later destroyed by the Israelis, thankfully)...

• And, worst of all, Syria was actively exporting weapons to Iraq's insurgents during the war that were used to kill American troops.

In a late update to the article, however, Terkel happens to remember one of many visits by Democrat leaders to express support for Syria's terror-state, but only to attempt to point out GOP "hypocrisy".

Yes, dimwit, because Syria -- a puppet of Iran -- was and is a known terror-state and avowed enemy of the U.S. Its support for Hezbollah, for instance, was also instrumental in the bombing that killed 241 U.S. Marines.

Not that you'd remember any of that, "Terkel" -- if that is your name.

another comes to mind - one bagdad jim mc dermit and cronies. and wasn't on saddam's dime.........

Pot really does kill memory doesn't it. Wow. Over and over on so many topics, the left simply forgets. At first I thought it was just... selective memory. But now? I think at least some of it is the over consumption of marijuana, among other "hip" substances.

Fortunately, with people coming awake and the internet which allows access to history (to some degree), memory lapses in the media do not become common man memory lapses. Shellacking? Over and over indeed.

Just so I am clear:

Several democrats meet with the enemy during wartime against the will of the White House - patriotic.

A Republican meets with an ally against the will of the White House - bad, bad, bad.

Check. They were right about one thing: we should not question their patriotism. There is no question about it: they have none.

Or the various fools going down to see HUGO.

But Cantor is actually strengthening, not undermining - it is obvious.

Obama, Clinton, etc., are the one's currently weakening, undermining, debasing the foreign policy of the USA and the FREE WEST.

Another example of hypocrisy!!!

This example is the GOP’s “One-Stop-Shop” of hypocrisy; the decimation of the middle class.

Cheney/Gregg's Deficit Reduction Act 2005 passed in RECONCILIATION, illegally with two different documents in the House and Senate, taxes the middle class elderly the total amount of their life savings if they need a nursing home. Most of these nursing homes are non-profit to boot, as it is in my parent's case.

In my parent's case this was a $600+ a day “tax” for 1.5 years before MassHealth (yes, Massachusetts) would consider their application. So my parents paid out their total life savings @ $600 a day to subsidize all the others in the nonprofit nursing home who are already on Medicaid.

This is the Cheney/Gregg's method of reduction of the deficit...off the backs of W.W.II Disabled Vets (my parents) who remain alive long enough to need a nursing home, but too old to complain. If they passed away before they needed the nursing home their life savings would have been inherited tax free (less than 2M). No inheritance tax?! They’ll get your assets when you enter a nursing home ($300+ a day each)!!!!!!!!!

Now that their life savings has gone to the nonprofit and Medicaid has kicked in, my parents still have to pay the nonprofit their retirement income of $69,348 a year, as it should be!!!!!! …but only after Medicaid demands they continue to pay their Medicare and Federal Blue Cross insurance premiums of $5,505 a year. They have prescription coverage under their Medigap policy, but they still were forced to Medicare D.

Why wasn’t their retirement income of $69,348 (minus the premiums of $5,505 still required of them going to Medicare and Federal Blue Cross) enough for the nonprofit nursing home from the date of their admissions? Ask Cheney/Gregg.

Gregg says now… “We can all agree that no American should lose their life savings or their home because of illness or injury and that the rising cost of health care severely burdens individuals, families and businesses,” Gregg wrote in his letter to Obama this week. “Report after report also confirms that health care costs are a systemic risk to the long-term fiscal health of our nation.”

He apparently forgot about his Deficit Reduction Act 2005 he passed in reconciliation which does exactly this to the elderly needing nursing homes who have saved more than $2,000 in their lifetime and not hidden it.

Cheney/Gregg's DRA 2005 is the perfect example of how the GOP reduces the deficit off the backs of W.W.II Vets with a tax of $300+/day...the perfect storm of GOP, health care debate let them eat cake and GOP hypocrisy.

Medicare does not cover nursing homes. My parent’s life savings does. Watch Sen. Gregg "not" answer the hard questions about what he did here.

Wake up all you elders who are on Medicare or Medicare Advantage and LOVE them. Cheney/Gregg and nonprofit nursing homes CFO’s are counting on you and your families to remain hapless while they take your life savings from you if you ever need long-term care.

The gentleman in the next room to my parents purchased long-term-care insurance to protect his assets. It turns out that this policy will not pay for his long-term care now (he was duped by the countless loopholes). So his and my parents’ life savings are paying for all the others in that nonprofit nursing home who hid their assets and/or are already on Medicaid.

Pay close attention to how the GOP will not address what they did to the elderly with the Deficit Reduction Act 2005 that passed in reconciliation. They counted on the elderly to be and remain ignorant until they are admitted into nonprofit nursing homes…

So you blame a relatively recent bill for 50 years of Democrat tinkering with the health care system? Medicare, Medicaid and other distortions in health care delivery are utterly bankrupt for generations to come.

Everything the Democrats have touched has turned to s***, and you blame Cheney/Gregg?

Apparently gutting the middleclass elderly Vets of their life savings when they enter nursing homes by passing the DRA 2005 in reconcillation didn't help reduce the debt created by Bush/Cheney.

But they did find out that this was a good demographic to target...not too many complaints from the elderly in nursing homes.

Blue Cross/Blue Shield and Medicare still get their premiums of $5,500/yr. (which also included prescription coverage) a year but they were forced to Medicare D.

Wake up, you're next!!!! R or D does not matter here. Stand up for the middle class.

And what about Candidate Obama's trip to Iraq in summer 2008, after which an Iraqi foreign ministry official reported that Obama had asked the IRAQIS to delay any withdrawal of American troops until AFTER he were elected president? (So HE could get credit for ending the war, of course)

Pelosi et al. and their hatred of Israel is nauseating. They should take a lesson from Col. Allen West: