Great News! 824,000 Jobs Will Disappear on Feb. 5th. The Obamaconomy rolls on, crushing everything in its path.

Gee, you say the government overstated the number of jobs by nearly a million? Tyler Durden has the shiny pictures and text from Bloomberg (the news service, not the idiot mayor):

Last October the BLS announced it would revise historical payrolls lower by 824,000 on February 5 (this Friday's NFP release). While this number will not impact the actual January NFP report..., it will be prorated across all months in the 2008-2009 reporting period... 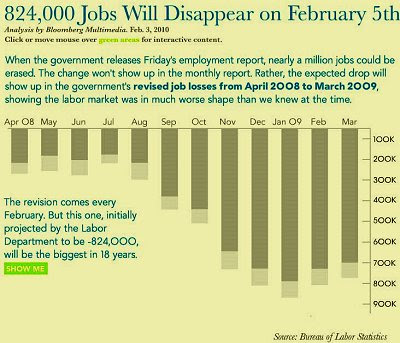 The reason for this adjustment has to do with a huge glitch in the birth-death model, which is exactly the same problem that the rating agencies faced when housing prices plummeted: the birth/death model assumes, in the long-run, jobs are created, not destroyed. Any period of excess volatility in the stock market therefore translates into major prior downward revisions to already disclosed payrolls.

And while we know what the current revision will be, the scarier prospect is that the next historical adjustment, due out in early 2011, will be even larger, at least 990,000. This means that the government has overrepresented running payroll data by over 1.8 million jobs over the past 20 months...

...In essence, a Moody's-like glitch has misrepresented the true payroll picture due to modelling error to the tune of over 1.8 million jobs. How that will impact the president's "jobs saved or created" calculation has yet to be determined. Unless of course all those jobs appear merely on the same excel file that the BLS uses for all it other erroneous calculations.