How the sheer idiocy of the NRSC, John Cornyn, Whimsy Graham and Karl Rove cost the GOP as many as five Senate seats

The National Republican Senatorial Committee spent $3 million in the week before the election on the ill-fated campaign of Carly Fiorina, despite polling that showed her trailing by 9 points to the tiny Marxist Barbara Boxer (Fiorina ended up losing by... 9.8%).

In the mean time, Ken Buck lost by a tiny margin in Colorado; Nevada's Sharron Angle lost by a similar narrow vote total, Dino Rossi was edged by Patty Murray in Washington, 27,000 votes swung the election against Christine O'Donnell in Delaware and and Joe Miller is hanging by a thread in Alaska.

In Alaska, the final results may not be known for some time, but the NRSC's final ads actually ended up helping Lisa Murkowski in her write-in campaign against GOP nominee Joe Miller. Instead of attacking Murkowski -- the candidate who most threatened the party's nominee -- the NRSC instead took aim at Democrat Scott McAdams, who had no chance of winning. Any support they drove from McAdams was far more likely to go to Murkowski than to Miller -- meaning the NRSC effort probably did more harm than good for Miller's campaign.

In other words, the NRSC's idiocy -- combined with outrageous remarks by Karl Rove on national television -- likely doomed four or five true conservative candidates to extinction.

Oh, but that $8 million spent on Fiorina's campaign didn't hurt at all -- right, boys?

I know one thing: that $3 million spent in the final weeks on those five campaigns could have swung four or five seats to the GOP. But the idiots at the NRSC are selfish, insular Beltway Republicans who are wedded to the status quo.

Give directly to conservative candidates -- and don't send even a dime to the NRSC or any of Karl Rove's pathetic groups (e.g., "American Crossroads" -- or, as I like to call it, "American Double-Crossers").

You can and should support the PACs of true conservatives like Jim DeMint, such as The Senate Conservatives Fund.

As for you, Whimsy Graham -- I can't wait until 2014. I will come to South Carolina, I will do whatever it takes to help defeat you in the primary. 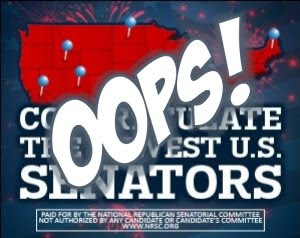 at 11:01 AM
Email ThisBlogThis!Share to TwitterShare to FacebookShare to Pinterest
Labels: Protecting America

No, it wasn't the NRSC that lost the SEATS, it was the Candidates selected, which gave us poor offerings.

Some were very bad TEA PARTY Express fantasies, which were insane conceptions.

Karl Rove actually helped the election ability of the GOP this year with his Political Action group.

This is silly spin Mr. Ross, simply not even close to reality.

It was the Candidates, the voters, and some bad ideas.

The TEA PARTY EXPRESS actually hurt much of the effort, with poor selections like O'Donnell, whose terrible presence was actually exploited by the Democrats to use to stereotype all of their opposition.

It was even more odd to see some Conservative Pundits suggest that Obama and Biden were heading to Delaware because it might indicate that Race was close - nonsense. That Race was always a gift to Democrats, Obama - Biden - the Partisan Media were merely trying to highlight the horrid O'Donnell offering as a symbol for all of the GOP, and sadly in some arenas, it worked.

This is sounding as delusional as the mighty EIB, who is merely sticking to a narrative out of pushing the fashion. It is isn't even close to reality, and the credibility is sinking.

Time to move on, step back, regroup, and never pull another O'Donnell again.

You do realize how small Delaware is, right?

And frankly, in an effort to get rid of Boxer?

I would have spent much more.

"It was the candidates"
So who selected the candidates?
I submit that those who think they can do better than O'Donnell should just throw their hat in the ring and have at it.

I submit that Coons will be an effective tool for Obama from his first day in the Senate. That his record of raising taxes in New Castle will be far exceeded in Washington D.C., where there is not a single Democrat who is opposed to raising taxes.

The voters of Delaware had a chance for the first time in years to send a decent person to Washington D.C., instead they sent an Obama tool, a Reid pet. I believe there will be a lot of voters who will regret that for a long long time.

To be fair, the NRSC ran a great ad for Mark Kirk--it repeated the Mob Banker's quote, "We need an income tax increase" with his image on several Chicago skycrapers.

It was the best ad for Kirk.

In the Connecticut primary, the Republican establishment backed Linda McMahon, of World Wrestling Entertainment, over Rob Simmons, an Army Colonel who teaches at Yale.

NRSC called yesterday asking for money. I said NO as I prefer to give straight to the candidate and will not give for fear a penny of my money may go to Lindsey Graham.

Also told them I know how to reach and donate to Sen. DeMint.

It's a hoot for sure. The Republican Party called me this morning to "thank me for supporting the party and the huge gains that were made" and of course asked me for money. There was a bit of silence on the other end of the phone when I told the woman that I gave to individual candidates ONLY during this election cycle, and also that I thought the party had not properly supported duly victorious primary candidates.

Sorry, Mr. Steele, but you are not getting more cash from me for a while.

THANK YOU for posting this! I really like your blog and glad I found it!!