Check out the final vote totals from Delaware. 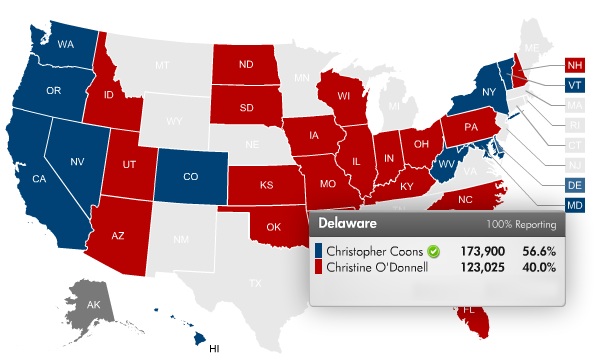 A swing of only 27,000 votes would have tilted the race towards Tea Party favorite Christine O'Donnell.

And recall that O'Donnell -- from the moment she won the GOP primary -- was immediately kneecapped by the Republican establishment.

I just finished watching Karl Rove trashing GOP Senate primary winner Christine O’Donnell. It was on Sean Hannity’s FNC show. Might as well have been Olbermann on MSNBC. The establishment Beltway strategist couldn’t even bother with an obligatory word of congratulations for O’Donnell. He criticized her “character” and “rectitude” and claimed she hadn’t answered questions about her financial woes. She did so here. Rove mocked her security concerns as “nutty.” Yet, her concerns have been more than justified. See here (second video clip). 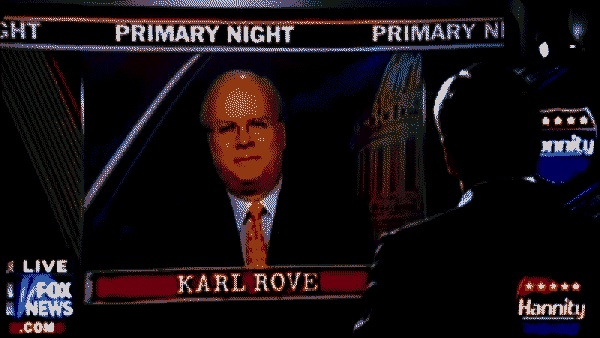 Rove came across as an effete sore loser instead of the supposedly brilliant and grounded GOP strategist that he’s supposed to be. Expect more Washington Republicans to start sounding like Tea Party-bashing libs as their entrenched incumbent friends go down.

How many voters were influenced by Rove's crazed attacks?

The GOP establishment is a disgrace. As we shall see in the weeks and months ahead, they represent nothing less than an anachronism. They're antiques. And, if they can't get with the program, they're going to be crushed like eggshells in future elections.

Um, okay... Every liberal in Delaware listens to Karl Rove, and he can move 27,000 Delaware votes...

Moreover, you are so angry at the "establishment" for "not listening" to the people who agree with you... But The People of Delaware just spoke with one loud voice. They said, "We don't like Christina O'Donnel (and her radical and stupid opinions)." The People of Delaware also said that they are very liberal, which we have always known about Delaware.

But now we're supposed to start bashing Rove for expressing his opinion, even though you originally thought he ignored your opinion?

Christina O'Donnell sued her former employer for $7 million for "gender discrimination." Maybe it's time to file a junk lawsuit against The People of Delaware for expressing their opinion. That's all she's good for.

Rove should have spoken out about how Meg Whitma'sn obscene campaign advised by Mike Murphy lost it for California.

Rove's assault on O'Donnell is his way of distacting the failure of Ruling Class Republicans.

O'Donnell and the Tea Party Express lost that race, not Karl Rove.

Seriously Mr. Ross, this blame Rove stuff is the ultimate in silly denial. This is a terribly poor offering. Rove has helped the Conservative cause for years now. He is top notch.

O'Donnell was a terrible offering. And the more we see some unable to admit the reality, the more they lower their credibility.

This was someone who gave Biden's long time Seat, back to Democratic Partisan hands for 6 years.

It was utterly foolish, knowing the priority was gaining the majority - and now Democrats were given a break. The fashionable Conservative embrace, the Image game, was entirely misguided again.

Rove was mere stating the obvious, as any honest conservative would. Facts and reason are the key, not hype about some identity movement.

We knew someone as poor as O'Donnell was going to lose, no matter what. Anyone who didn't grasp this, was simply not thinking clearly. Some seemed to be playing to the fashion, but it is even more bizarre to see those Pundits who actually believed in the lost cause. The delusional Riehl's in the world, sent many astray it seems.

This nutty anti-GOP establishment embrace has been dividing us, and has lost sight of the priority. The Republicans have been overtly demonized, which is far from Conservative. A number of the big reactionary voices are crying foul for their own personal gain.

O'Donnell was so bad, her presence actually debased some of the Republican Offerings as a whole. Angle wasn't much better unfortunately. Rove may have saved some votes, along with so many others, including KRAUTHAMMER, who wisely distanced themselves from the terrible O'Donnell offering.

If some Conservatives cannot be honest about the O'Donnell fiasco, then they might not be the one's we should be paying attention to. They will only repeat the mistake, over and over.

And they probably will advocate for a very poor candidate in 2012.

Fashionable Identity Movements are always weak, but Conservatives used to about reality, not fantasy.

Castle is the reason voters don't trust Republicans. He voted with the Democrats more often than not.

The Tea Party worked within the system so as not to splinter the Republicans and the thanks they get is a stab in the back.
Screw the Republicans, time for a third party.