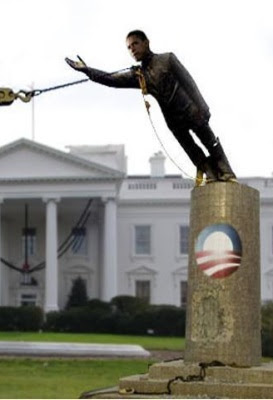 Thirty-six Reasons to Vote Democrat: AT
“America is at a Tipping Point” …: ProWis
Boehner Hammers Obama in Cincinnati: Nice Deb

This is America, Stupid: AT
Confessions of a price controller: American
Turncoat Organizations Abandoning the Base: AT

California's Brown Wall: AT
From Peggy the Moocher to Nameless the Beggar: Malkin
9 Years of Housing Backlog at Current Sales Pace: Mish

Hannity, Levin Blast Murkowski: Equalizer
Poll: Support For Illegal Immigration Plummets From 50% to 29% Among… Latinos: WZ
Tingles on Why Obama’s Been a Failure: He’s an “Elitist,” Chicago-Style Politics, “That Damn Teleprompter”: WZ

Breitbart Busts ABC News for Lying: Instapundit
Well, It Turns Out You Don't Need To Watch ABCNews On Election Night After All: Ace
It’s the Policy, Stupid: Tina Disses Barack for the Wrong Reasons: PJM

The German Example: JRubin
Iraq: Survivors of Bloodbath at Catholic Church Say They Were Taunted With Islamic Doctrine by Attackers: WZ
Sarah Palin Proudly Shows Her Support For Israel While Campaigning in West Virginia…: WZ

Report: Cargo Plane Bombs Were Meant To Bring Down Planes In Flight: Ace

Practicing First Amendment without regard for public's safety.: C&S
Liberal Douchebags at Stewart Rally: How Dare You Call Obama a Keynesian, He Was Born in Hawaii!…: WZ
There's An App For That: Ace

at 5:52 AM
Email ThisBlogThis!Share to TwitterShare to FacebookShare to Pinterest
Labels: Linkfest

A great day to return a little sanity to the Country.

But LL has to include another delusional Riehl item, which tries again to demonize the Republicans and play populism with the 'old guard'?

Please, the nutty nonsense is about as wacky as something from the silly HUFFPO.

\We cannot afford to give the Democrats anything anymore.

Regarding the AD LL suggests Delaware did not want to see, it is fun.

However, this link probably should be added to LL's offering:

SEE:
"The most covered candidate of 2010: Christine O’Donnell"

I couldn't believe some on Our Own side trying to sell some complete nonsense to Conservatives. They must have known the reason Obama, Biden, etc., were visiting Delaware was to highlight that Race to a National Level intending to debase all opposition with the ugly stereotyping they use, with the poor offering Mrs. O'Donnell provides.

OF COURSE, the MSM Democrats and the Democratic Party would give her the most attention and focus - and it was garbage to suggest that they were worried about her vs. the disastrous Coons.

I hope it all backfires on them, with a miracle. We could have easily had this Seat caucusing with the Republicans for 6 years - BIDEN's OLD SEAT!

But nope, we went with fashion, and Democrats were thrilled.

Who knows, miracles do happen, but this is Delaware.

Anyhow, the revealing aspect was, just how far some Conservative Pundits will go, to appear 'in' with a fashionable concept, even if it takes us all over a cliff, and weaken a movement.

Lessons for the future, which will not be paid attention too, by the looks of many on Our side.

2012 best not be another enabling of the Democratic Party, as it was with that disastrous Maverick Ticket - the McCain-Palin Failure.

theres little to celebrate as long as jews control the treasury