On Wednesday talk show host and constitutional attorney Mark Levin pointed his Facebook followers to a curious article published in the October 28th edition of The New England Journal of Medicine (PDF).

The outcome of the 2010 congressional elections may well determine whether this landmark legislation succeeds or fails.

Put another way: the outcome of the 2010 elections reflects the electorate's desire to have the landmark legislation fail.

The evidence of party polarization is overwhelming (see table). A majority of both parties ended up voting for the original Social Security Act, although Republicans had campaigned actively against it. Many members of both parties voted for the legislation that created Medicare and Medicaid, that revamped welfare, and that created Medicare drug coverage (Part D). Not so in 2010.

Gee, you think that had anything to do with being completely shut out of the process? Or, as MSNBC put it, "House and Senate Democrats intend to bypass traditional procedures when they negotiate a final compromise on health care legislation, officials said Monday, a move that will exclude Republican lawmakers... in both houses."

The ACA is nothing if not ambitious. It proposes to enroll tens of millions of people in private health insurance plans through yet-to-be-created health insurance exchanges. It will provide millions of Americans with subsidies tied to income and health insurance costs. It will greatly expand Medicaid. It will set and enforce standards for private insurance... It will create a new commission to oversee Medicare... [and this] is but a partial listing of the provisions of the 906-page bill. If permitted to run its course, the ACA promises to transform the U.S. health care system... 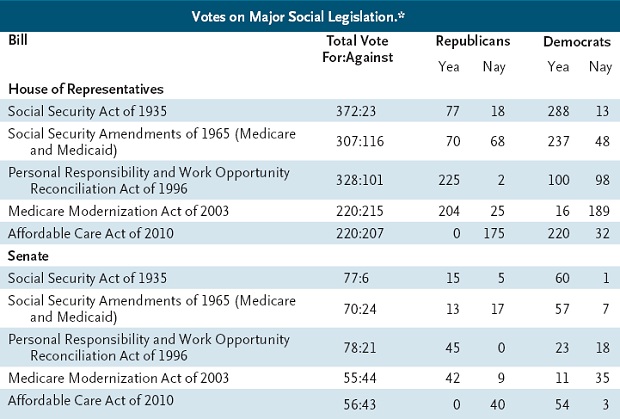 But successful implementation poses remarkable challenges and will require adequate funding, enormous ingenuity, and goodwill from federal and state officials, as well as cooperation from private insurers, businesses and private citizens.

That would be the same private citizens that kicked record numbers of Democrats out of office for passing this Soviet-style plan.

A more serious possibility [than repeal] is that ACA opponents could deliver on another pledge: to cut off funding for implementation. Here is how such a process could work...

The ACA contains 64 specific authorizations to spend up to $105.6 billion and 51 general authorizations to spend “such sums as are necessary” over the period between 2010 and 2019. None of these funds will flow, however, unless Congress enacts specific appropriation bills. In addition, section 1005 of the ACA appropriated $1 billion to support the cost of implementation in the Department of Health and Human Services (DHHS).... [and the] ACA appropriated nothing for the Internal Revenue Service, which must collect the information needed to compute subsidies and pay them. The ACA also provides unlimited funding for grants to states to support the creation of health insurance exchanges (section 1311). But states will also incur substantially increased administrative costs to enroll millions of newly eligible Medicaid beneficiaries...

Without large additional appropriations, implementation will be crippled.

Since most major provisions of the ACA do not take effect until January 1, 2014, [these] delaying tactics might eventually enable repeal...

Perhaps the more likely — and in some ways more troubling — possibility is that the effort to repeal the bill will not succeed, but the tactic of crippling implementation will. The nation would then be left with zombie legislation, a program that lives on but works badly, consisting of poorly funded and understaffed state health exchanges that cannot bring needed improvements to the individual and small-group insurance markets, clumsily administered subsidies that lead to needless resentment and confusion, and mandates that are capriciously enforced.

Zombie legislation. Perfect. After all, this bill was the result of a historic Democrat overreach. And everyone knows that the Democrat Party routinely employs zombies (along with felons and illegal aliens) in its election wins.

Thanks, Dr. Aaron. We appreciate your instructions for starving this vampire entitlement of the taxpayers' blood it requires.

Defunding might be good if nothing else works, but only until it can be legitimately voted out. What progressives love to do is get stuff on the books and hope to gain power at some point at which they implement it fully if they fail to do so while putting it on the books. Why do you think they always called for more and more laws on everything from gun control to regulating the size of holes in cheese while not funding enforcing the laws on the books well? It is just biding time until they can bring it all together for authoritarian power.

the did the same thing when bubba tried to pass health care reform - booted the democrats out and voted in republicans. obama is stupid if he thinks that people want the failed socialism.

The issue is how are we going to help control health care costs? Check out Whatstherealcost.org.