A study funded by AAA probably represents the most comprehensive research project into the causes of teen driving accidents ever conducted. 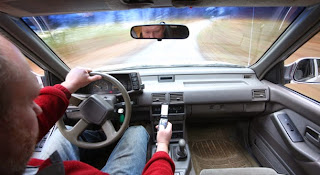 The research team analyzed nearly 1,700 videos taken from in-vehicle event recorders covering the six seconds immediately prior to crashes involving teen drivers. Results identified driver distraction as a factor in 58% of all crashes studied, including 89% of road-departure crashes and 76% of rear-end crashes. The National HIghway Traffic Safety Administration (NHTSA) had previously estimated that distraction would be a factor in only 14% of teen driver crashes, which had to be an absurdly low expectation given the ubiquity of cellphone and texting addiction among (but not limited to) teens.

Video data was recorded by Lytx DriveCam devices that collect video, audio and accelerometer data when a driver triggers an in-vehicle device by hard braking, fast cornering or impacts that exceed a certain g-force. Each video is 12 seconds long and provides information from before and after the trigger event...

...The AAA researchers found that drivers manipulating their cellphone (calling, texting or other uses), had their eyes off the road for an average of 4.1 out of the final six seconds leading up to a crash. According to distraction.gov, checking a text typically takes your eyes off the road for 4.6 seconds, during which time the car will have covered the length of a football field when traveling at 55 miles per hour.

The top 7 reasons for teen crashes:

ind the wheel were found to be:

Send this to any teen drivers you know.

at 9:18 PM
Email ThisBlogThis!Share to TwitterShare to FacebookShare to Pinterest
Labels: Autos