BILL WHITTLE: "SIR, I WILL NOT OBEY THAT ORDER."

Let’s just assume for a moment that you’re a radical, left-wing zealot, who was raised by actual communists, and who, naturally enough views the United States military as the tool of capitalist exploitation and colonial racism. Now, further assume that through a perfect storm of Extraordinary Popular Delusions and the Madness of Crowds, fate, money, power and media bias somehow conspired to make you Commander in Chief of those same armed forces. 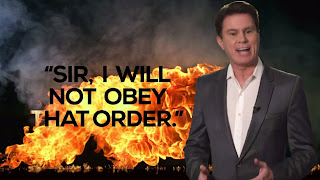 What would you do?

You couldn’t very well scuttle 11 carrier strike groups. You can’t just destroy entire air wings, or armored divisions, or any of the rest – no matter how much you may want to. That would break the spell.

If you hate this country, and you especially hate the military, you simply cannot go around destroying the weapons – that’s too obvious. But you can do something much more subtle, and in the long run, even more disastrous, if your stated goal is to fundamentally change the country and the military that protects and defends it.

You don’t have to destroy the weapons. You don’t even have to destroy the warriors. All you have to do is create a set of conditions that are so incompatible with the warrior code that the warriors will remove themselves, because these are people who risk death and dismemberment, and whether at the tip or the end of the spear, generally live in appalling conditions, under great emotional hardship, for disgraceful levels of pay.

These people joined the military out of an inner calling, a sense of duty and of honor, and it is in fact possible to create an environment so toxic to these values that they not only will not stay – they simply cannot. And there is a lot of evidence that this is in fact happening, and quickly.

I’ve heard of Air Force Generals beaming with pride, not over their command’s combat readiness or training levels, but rather for having the greenest installation, or for having achieved the most severe personnel reductions.

I’ve talked to a Chief Petty Officer with 23 years in the Navy who simply said that the ancient, fundamental solace given to sailors in exchange for spending most of their lives in a steel hole in the water – shore leave, much more properly referred to as “liberty” – is nothing like liberty anymore: no longer a trip down the gangplank to do whatever you damn well wanted to, so long as you were back on time, but now rather a supervised, audited series of joyless stays in pre-approved venues, with check-ins and regimentation and more structure than a week at a diet resort.

I’m hearing stories like this all the time – all the time! – but one of them really stood out. It frankly made my blood run cold.

I was at a fundraiser in Colorado, and I struck up a conversation with a Major who was in command of a group of about 500 Special Forces personnel.

He told me that he was no longer able to train his men in how to do their jobs and come home afterwards, because these days his time had to be spent making sure that none of his soldiers had tattoos that might be considered offensive to women, gays, lesbian or transgendered personnel; that he had to scour the barracks of these young warriors who were prepared to fight and die for their country in order to make sure there were no Maxim magazines or any other images of naked women that might make the home of these deadly, aggressive, disciplined men into a hostile work environment. He had to do all of this nonsense, more and more of it each year, and spend less and less time doing what he, and his soldiers, had signed up to do in the first place: namely, train to go out there and kill the enemies of freedom.

Then one day, his commanding officer came to him with a new policy. He told this young Major that he was required to poll all of the people in his command and ascertain whether they, or anyone else in their household, owned their own weapons and if so how many and of what kind. And he calmly told me that he turned to his superior officer and said, “Sir, I will not obey that order.”

I have never, ever feared a military or political coup in this country – never. I have never feared that the day may come when the American military would open fire on law-abiding American civilians, because of the presence of men like this young major and the traditions and the code of personal integrity and honor that men and women like that maintain. As long as we have people like that in the military, we have nothing to fear.

...That man is no longer in the military.

Orders like the one he could not obey come down from the Commander-in-Chief, and his hand-picked generals who are promoted based on their ability to conform to these deplorable and dishonorable policies. That Commander-in-Chief does not need to be embarrassed by cashiering the real warriors – all he has to do is create policies and codes so disruptive, so ridiculous and dishonorable that they can simply no longer abide by them.

Money can buy weapons. But nothing but blood can buy experience. We have not only the most well-armed and well-trained forces in the world – they are, or were, battle-hardened in the furnace of actual combat, and that precious, irreplaceable, battlefield experience is being intentionally forced out of the military to be replaced with recruits who can’t do pull-ups and a gutless, compliant political class of admirals and generals whose careers mean more than the dignity, the morale, or even the safety of the men and women who have entrusted them with their lives.

Three times in my career I told a superior officer to put their order in writing. Not one did because they knew it was wrong. I was never popular with my command except when I was at the battalion level and accomplishing the mission was what counted.