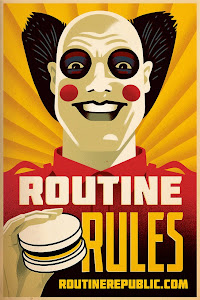 That, at least, is the upshot of "Routine Republic," a riveting and surreal new Taco Bell campaign from Deutsch. A year after the agency cheekily hired a bunch of guys named Ronald McDonald to celebrate the Mexican-themed fast-food chain's first foray into breakfast, the shots at the Golden Arches are barely masked.

In the three-minute centerpiece ad ..., McDonald's affable but intrinsically creepy mascot is reimagined as a sunken-eyed Stalinist clown (though perhaps bearing closer resemblance to Mao). He rules over a small army of look-alikes and an oppressed proletariat in a decrepit, cloistered city with a beefy security apparatus. Run-of-the-mill breakfast sandwiches are his preferred method of subjugation.

Watch the video after the break:

at 6:09 PM
Email ThisBlogThis!Share to TwitterShare to FacebookShare to Pinterest
Labels: Marketing

Ahh dude, where in the world do you get this stuff?
MM

Fast food eaters of the world unite! You have nothing to lose but your chins!

Non-conformists cook their own own food. Better yet, loving wives cook a wonderful breakfast to help their husbands to face a world mired in political correctness.