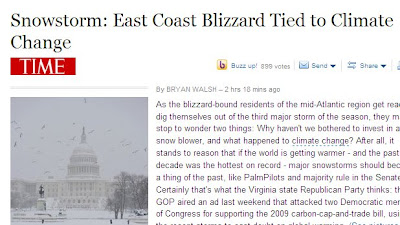 After the laughter subsided, visitors to its website noticed that the headline had changed to "Another Blizzard: What Happened to Global Warming?.

I emailed Time with a suggestion for a new headline -- "Serial Blizzards That Resemble a New Ice Age Prove Global Warming Is Real" -- but have not yet heard back.

In all seriousness, the text of the article is something out of a rejected SNL skit: it's just too preposterous. Some of my favorite quotes? 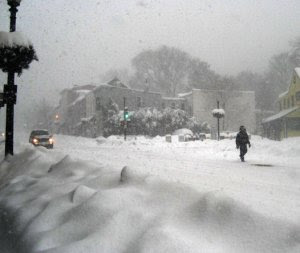 • "There is some evidence that climate change could in fact make such massive snowstorms more common, even as the world continues to warm." And there's also evidence that eating five bags of pork rinds a day could cause you to lose weight, but I can't quite prove that yet.

• "While the frequency of storms in the middle latitudes has decreased as the climate has warmed, the intensity of those storms has increased. That's in part because of global warming — hotter air can hold more moisture..." And stupid people can hold more crap, but I digress.

• "But as far as winter storms go, shouldn't climate change make it too warm for snow to fall? Eventually that is likely to happen — but probably not for a while." Or at least not until we've passed Cap-and-Trade and the new Lightbulb Bill.

• "As global temperatures have risen, the winter ice cover over the Great Lakes has shrunk, which has led to even more moisture in the atmosphere and more snow in the already hard-hit Great Lakes region." See, it's easy to follow: warming has shrunk ice cover in that region while greatly increasing the snow cover!

Just the Democrat-Statist talking points, recited to an audience that's disappearing faster than a gallon of ice cream in front of Michael Moore's pie hole.

Time Magazine thinks its readers are really, really dumb. Perhaps the few that remain are truly stupid. But I kinda doubt it. They'd be working for Time if they were that dumb.


Linked by: Michelle Malkin and Ed Driscoll. Thanks!

the reader comments on the original time article say it all ....

However, it is sheer lunacy to suggest the lake not freezing has anything to do with the globe warming. If that were so, then why didn't the lake freeze for all but three years in the 1960's, and five times in the 80's?

I love when these people come out and say that this is the warmest the earth has been in 50 years. Well, what happened 50 years ago when it was this warm?

What does ice cover over the Great Lakes have to do with the East Coast storms, anyway. The first one came up the coast from the southeast and the second moved in from the southwest.

People are turning a COLD sholder to Time Magazine and WARMING UP to foreign, admitedly liberal news sources, who manned up and admited they too have been had by the global warming farce. Admiting one is wrong, even after decades of regurgitating in all media mediums, takes guts. Time Mag lacks inerds.

Apparently Time magazine did not check with any affiliates in Michigan.

We have had practically no snow in Michigan this year. We are at something like half our normal amount and at 1/3 of the snow last year.

I don't think the great lakes theory works that well. Most of the snow has come through south of Michigan, with no input from the lakes

The true proof of global warming will be every last human on earth freezing to death. Even Algore, no doubt, will freeze to death in his cavernous igloo that will use as much electricity as Phoenix, Buckeye, Avondale and Surprise combined.

Globull warming causes snow!!
Neighborhood kids are hustling to shovel my driveway.
1. Can obonehead claim this as 'jobs created'?
2. Are these 'green jobs'?

Excellent post. Your predictions are very much in line with what we are expecting to see in the near future.