Even if you're not a technophile, last month's report from inside a Chinese factory that manufactures electronic devices is well worth a read. In a nutshell, a Chinese newspaper sent a 20-year old reporter to work undercover in a mammoth factory owned by Foxconn. 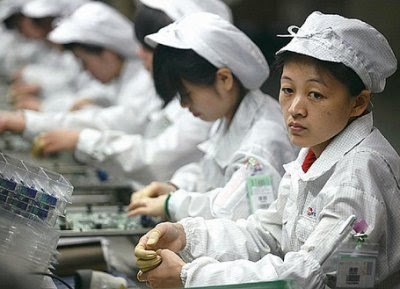 The factory employs 300,000+ workers who endlessly pump out iPods, iPads and iPhones under extremely poor conditions. In fact, the working environment is so stressful that at least nine employees attempted suicide since the beginning of the year. 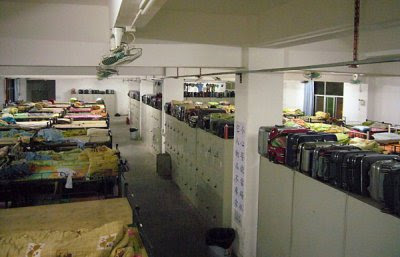 ...the factory workers live in a sort of indentured servitude. They work all day long, stopping only to quickly eat or to sleep. They repeat the same routine again and again except on public holidays. Liu’s was surmised that for many workers, the only escape from this cycle was to end their life.

Liu, a graduate student, was chosen because of his young age, since the factory only hires workers in their 20s. He was hired without issue. He signed only one special document: An overtime working agreement that says the company is not responsible for their long hours of working. According to Liu, this voluntary agreement overrules Chinese state regulation.

Foxconn workers only smile on the 10th of every month. That’s the day when they get their salaries. That day, the ATM machines inside the factory are crowded with workers. Their monthly salaries start at 900 Chinese Yuan – about $156.

The factory is so large that a consultant who showed up at the wrong entrance to the factory was told to get back in his car and drive to the next entrance. That trip took a half an hour.

Apple is not Foxconn's only customer. Reportedly Sony, HP, Microsoft, Nokia, Nintendo, Dell and Cisco are are also served by the company.

...some [employees are] paid only $130 a month at less than the Chinese minimum wage of about 55 cents. Some are working 98 hours per week, are under permanent surveillance, by cameras and co-workers, are not allowed to talk during work hours. 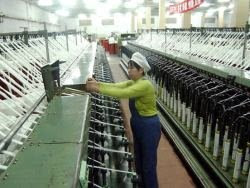 Microsoft recently came under fire for having its mice manufactured in sweatshops by 15 and 16 year old teenagers who work 15 hour days, 6 days a week for 52 cents per hour. They have to assemble 2000 Microsoft mice per shift.

In factories near Hong Kong, workers in such factories reportedly lose 40,000 fingers on the job every year, due to unsafe manufacturing equipment, according to the Shanghai Academy of Social Sciences. Consumer groups claim that companies consistently try to cheat their employees out of earned wages, do not provide health benefits and expose their workers to toxic materials like lead, cadmium and mercury. Here in the U.S. we are worried about baby bottles that may carry a potentially unsafe material and lead in toys. But we don’t care about those who assembled those products.

Earlier this year, other companies -- including Apple -- came under fire for using child slave labor, including eleven 15-year-old kids discovered in 2009.

The reason I bring all of this up? The New York Times' Thomas Friedman.

He lauds China's government endlessly, prattling on about pristine airports and train stations as if he got the VIP tour from a Communist Party drone. Which he probably did.

To put things in perspective, the Times is infamous -- notorious, in fact -- for suppressing news about the Holocaust during World War II.

Friedman appears to be carrying on that grand tradition, carrying water for despots and papering over the inhuman treatment of millions.

$156 dollars for a 300 hour work month, factory contracts that over-rule federal law, no EPA, no OSHA, no impending CO2 tax and a security team that can legally bury union activists in the waste pit: how the hell can any democracy compete with this? Every morning The One (tm) has a new shackle to put on american businesses; at least in china the whole proletariat gets to wear them.

Kinda like early America. Everyone left peaceful prosperous organic farms where they only had to work 6 hours a day and the sun always shined and it always rained at night. They left all that to work in a factory. /s

It's incredible that such conditions still exist in the modern world. Its even more amazing that we have people in this country who hold China as a model for anything. The only way to stop the abuses is to boycott the products. But as long as the public remain ignorant that is extremely unlikely.

Well, a lot has changed. The workers have received two raises at 20% a pop. Just as importantly, the 'company' will no longer offer a lump sum payout to the parents of the dead worker and they have terminated monthly checks (in some large fraction of the worker's total income I never really figured out to my satisfaction) that would continue for as long as the parents may live.

That said, it is still a pittance (of say 2 or 3K yearly assuming you are alive) compared to Taiwan where I am (and where Taiwanese have a 17K avg.).

For some reason the echoing phrase, "useful idiots" clouds my thinking. I just can't understand why?

Well, it ain't the outcome that Thomas Friedman admires, it's the power of the chinese gubmint to force people to do things the way they want, you know, the "correct" way, that he so admires.

He wants it, he needs it, it's his heart's yearning. He will try his best to get the "Precious", no matter how many Hobbits get hurt.