You can kiss tens of thousands of jobs in the Gulf goodbye, probably permanently. 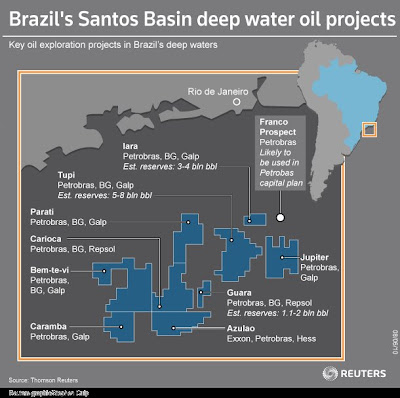 The economic destruction in the region is not due solely to the administration's inept handling of the Deepwater Horizon spill and cleanup. President Obama's ill-advised "moratorium" on offshore oil drilling is proving an economic disaster for the region and, indeed, the entire country.

Regarding the impact of the moratorium, experts have described several certain outcomes:

• "Tens of thousands will lose their jobs"
• U.S. oil production could fall by 160,000 barrels of oil per day in 2011
• The marginal cost of offshore drilling will increase by 10% due to new regulations

Brazil could benefit from the BP Gulf of Mexico spill as a U.S. moratorium on offshore drilling boosts available rigs for the country's deep water oil exploration program. 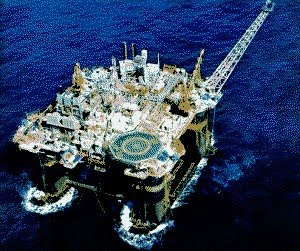 Even as an ecological catastrophe makes the future of U.S. offshore drilling less certain, Brazil is plowing ahead with a $220 billion five-year plan to tap oil fields even deeper than BP's (BP.L) ill-fated Gulf well, which is still leaking crude.

With an estimated 35 rigs idled in the Gulf of Mexico, Brazil is already receiving inquiries from companies looking to move their rigs here, where vast discoveries in recent years may soon turn the country into a major crude exporter.

... "Since operators are shutting down at least temporarily in the U.S. Gulf, some companies are planning to move their rigs to Brazil now," he said, without offering details.

...Brazilian officials, including government leaders and Petrobras executives, have said Brazil has no intention of slowing its offshore development as a result of the spill.

This is the modern Democrat Party in action:

• Killing tens of thousands of jobs when we can least afford the losses? Check and mate.

The President appears completely unprepared to do anything but give speeches. That's what he's good at and that's what he always done throughout his career.

The Democrat-controlled Congress is populated with hardcore Leftists that seek the destruction of Capitalism. That can be the only rational explanation for tripling the national debt in only 18 months when the CBO and the head of the Federal Reserve keep warning that the spending trajectory is headed for fiscal disaster.

These two elements make an extremely dangerous combination for the American people. I call them the Economic Death-Star, a confluence of progressive stupidity and inexperience that risks everything America stands for.

Linked by: Maggie's Notebook. Thanks!

Let's not forget who is heavly invested in Brazilian oil. George Soros.

"The U.S. is going to lend billions of dollars to Brazil's state-owned oil company, Petrobras, to finance exploration of the huge offshore discovery in Brazil's Tupi oil field in the Santos Basin near Rio de Janeiro. Brazil's planning minister confirmed that White House National Security Adviser James Jones met this month with Brazilian officials to talk about the loan."

So, in addition to the 3 billion Obama loaned to Brazil (or was it a gift?) he plans on giving more money to Brazil to drill, yet he won't allow drilling here? No, this isn't going to cut it.

Obama is deliberately destroying our economy, while enriching those, who like Brazil are our enemies. There has to be an end to this, if he believes that oil drilling is wrong, then there is no excuse for him giving money to allow another country do what he refuses to allow here. If this crook isn't sued in the courts for his deliberate fraud, then I don't know what else to think. We can't just sit on our hands and allow this to go on.