At The Oil Drum, an ominous and desperate picture has emerged of the scenario playing out undersea in the Gulf.

I took some time to go into a bit of detail concerning the failure of Top Kill because this was a significant event... the system below the sea floor has serious failures of varying magnitude in the complicated chain, and it is breaking down and it will continue to.

What does this mean? 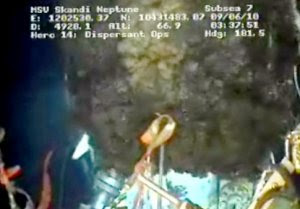 It means they will never cap the gusher after the wellhead. They cannot...the more they try and restrict the oil gushing out the bop?...the more it will transfer to the leaks below. Just like a leaky garden hose with a nozzle on it. When you open up the nozzle?...it doesn't leak so bad, you close the nozzle?...it leaks real bad...

...Contrary to what most of us would think as logical to stop the oil mess, actually opening up the gushing well and making it gush more became direction BP took after confirming that there was a leak. In fact if you note their actions, that should become clear. They have shifted from stopping or restricting the gusher to opening it up and catching it. This only makes sense if they want to relieve pressure at the leak hidden down below the seabed.....and that sort of leak is one of the most dangerous and potentially damaging kind of leak there could be. It is also inaccessible which compounds our problems. There is no way to stop that leak from above, all they can do is relieve the pressure on it and the only way to do that right now is to open up the nozzle above and gush more oil into the gulf and hopefully catch it, which they have done, they just neglected to tell us why, gee thanks.

A down hole leak is dangerous and damaging for several reasons. 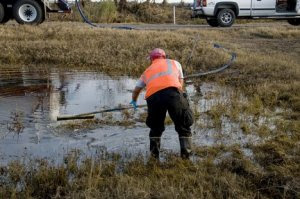 This down hole leak will undermine the foundation of the seabed in and around the well area. It also weakens the only thing holding up the massive Blow Out Preventer's immense bulk of 450 tons. In fact?...we are beginning to [see] the results of the well's total integrity beginning to fail due to the undermining being caused by the leaking well bore.

...If you have been watching the live feed cams you may have noticed that some of the ROVs are using an inclinometer...and inclinometer is an instrument that measures "Incline" or tilt. The BOP is not supposed to be tilting...and after the riser clip off operation it has begun to...

...These are clear and present dangers to the battered subsea safety structure (bop and lmrp) which is the only loose cork on this well we have left. The immediate (first 1,000 feet) of well structure that remains is now also undoubtedly compromised. However.....as bad as that is?...it is far from the only possible problems with this very problematic well. There were ongoing troubles with the entire process during the drilling of this well. There were also many compr[om]ises made by BP IMO which may have resulted in an overall weakened structure of the entire well system all the way to the bottom plug which is over 12,000 feet deep. Problems with the cementing procedure which was done by Haliburton and was deemed as “was against our best practices.” by a Haliburton employee on April 1st weeks before the well blew out. There is much more and I won't go into detail right now concerning the lower end of the well and the troubles encountered during the whole creation of this well and earlier "Well control" situations that were rev[ea]led in various internal BP e-mails...

What is likely to happen now? 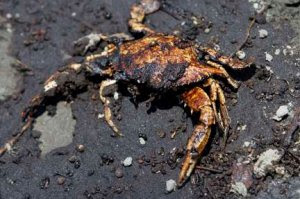 Well...none of what is likely to happen is good, in fact...it's about as bad as it gets. I am convinced the erosion and compromising of the entire system is accelerating and attacking more key structural areas of the well, the blow out preventer and surrounding strata holding it all up and together. This is evidenced by the tilt of the blow out preventer and the erosion which has exposed the well head connection. What eventually will happen is that the blow out preventer will literally tip over if they do not run supports to it as the currents push on it. I suspect they will run those supports as cables tied to anchors very soon, if they don't, they are inviting disaster that much sooner.

...All of these things lead to only one place, a fully wide open well bore directly to the oil deposit...after that, it goes into the realm of "the worst things you can think of" The well may come completely apart as the inner liners fail. There is still a very long drill string in the well, that could literally come flying out...as I said...all the worst things you can think of are a possibility, but the very least damaging outcome as bad as it is, is that we are stuck with a wide open gusher blowing out 150,000 barrels a day of raw oil or more. There isn't any "cap dome" or any other suck fixer device on earth that exists or could be built that will stop it from gushing out and doing more and more damage to the gulf. While at the same time also doing more damage to the well, making the chance of halting it with a kill from the bottom up less and less likely to work, which as it stands now?....is the only real chance we have left to stop it all. 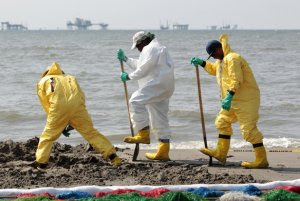 It's a race now...a race to drill the relief wells and take our last chance at killing this monster before the whole weakened, wore out, blown out, leaking and failing system gives up it's last gasp in a horrific crescendo.

We are not even 2 months into it, barely half way by even optimistic estimates. The damage done by the leaked oil now is virtually immeasurable already and it will not get better, it can only get worse. No matter how much they can collect, there will still be thousands and thousands of gallons leaking out every minute, every hour of every day. We have 2 months left before the relief wells are even near in position and set up to take a kill shot and that is being optimistic as I said.

Over the next 2 months the mechanical situation also cannot improve, it can only get worse, getting better is an impossibility. While they may make some gains on collecting the leaked oil, the structural situation cannot heal itself. It will continue to erode and flow out more oil and eventually the inevitable collapse which cannot be stopped will happen. It is only a simple matter of who can "get there first"...us or the well. 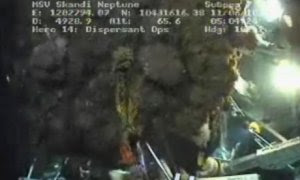 We can only hope the race against that eventuality is one we can win, but my assessment I am sad to say is that we will not... The system will collapse or fail substantially before we reach the finish line ahead of the well and the worst is yet to come.

Sorry to bring you that news, I know it is grim, but that is the way I see it....I sincerely hope I am wrong.

We need to prepare for the possibility of this blow out sending more oil into the gulf per week then what we already have now, because that is what a collapse of the system will cause. All the collection efforts that have captured oil will be erased in short order. The magnitude of this disaster will increase exponentially by the time we can do anything to halt it and our odds of actually even being able to halt it will go down.

The magnitude and impact of this disaster will eclipse anything we have known in our life times if the worst or even near worst happens...

If what this article predicts comes true you will see law suits from all the other countries bordering the Gulf as oil reaches their shores.

BP
The United States of America

You can close this with a bomb. The russians have done it. Of course they are smarter than Obama

I don't know how tin foil hat this is, but the rumours are that if the top blows off, eventually water will spill down into the hole and cause geyser-like effects, which include the possibility of tsunamis.

I took the time to go into some detail on the dieback aborted because it was an important event. For those of us outside the loop real inside, and even fairly well informed, it was a confirmation of what many many feared. The subsurface system has serious defects of varying size in the complex chain, and it is down, and it will continue to.

I think the obvious conclusion we can all make is that the ass which needs to be kicked is former President Bush’s. It’s all his fault, as is everything else that goes wrong. How do I know this to be true? The media tells me so. Even the scathing Rolling Stone article on Obama’s handling of this disaster lets us know at the very beginning:

“The Spill, The Scandal and the President:
The inside story of how Obama failed to crack down on the corruption of the Bush years – and let the world’s most dangerous oil company get away with murder.”

Is it not odd to anyone that the source of this information is now unavailable. Is someone blocking the site to try and suppress this info?

The ass kicking belongs to the regulators, and Obama, why do you think Obama's newly minted head of MMS was fired early on ....

Per the WSJ -- The wisdom of the MMS allowing BP to use a single casing well design is now realized in a continuous gusher.

I suppose that citing the wisdom of the MMS allowing BP to continue with the well capping, when the prudent course was to sink another casing, six weeks before, when they all knew the well casing was compromised, the drill bit got stuck ... is now old news. Hey what did you think the argument on the drill rig deck was all about.

So now we have massive BIG GOVERNMENT regulatory failure and the people get cap and tax.

If you haven't already, I recommend reading about the whole series of regulatory blunders in the WSJ, just search for oil spill and have fun.

It just shows what regulators rubber stamping oil company well plans will do.

And hey I haven't even touched on the MMS waiver for spill containment in the event of a blowout -- or the father-son MMS team assigned to safety inspections, or ....

First, you might kick the butt that manages to solve the problem. I own an observer's tee-shirt to such a situation that had a wise manager.

Second, you waste time and effort that could better be spent solving the problem.

Third, the butt that needs kicking most probably is not going away in the time it takes to find a solution. You can always get your visceral kick-butt thrills at a later date. You cannot cope as well at that later date if you waste opportunities and the disaster becomes larger.