I'm trying to determine whether the better analogy for our beloved President is Milli Vanilli -- or D-Day from Animal House.

Barack Oama told The Politico this morning that the Gulf oil spill was like 9-11. 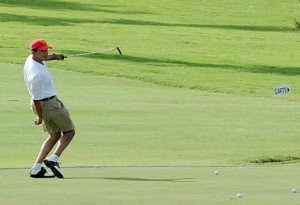 Then he went golfing for 4 hours.

President Barack Obama spent four hours on the golf course Sunday in temperatures that peaked in the low 90s.

The White House pool reported that they left Andrews Air Force Base as it started to rain after 4 p.m.

Transportation Secretary Ray LaHood was among the group golfing with Obama.

Fortunately, there are no truly pressing matters of state to which the President must attend. No nuclear terror states of note. No environmental disasters unfolding. No economic worries to speak of. No impending entitlement catastrophes.

Why only four hours of golf? Blame it on the rain.

Rather than focusing like a laser on job creation, the oil spill, and the economy - Obama plays with his putter.

I gather (since I heard no mention of a TelePrompter) that the Won is now saying that Moslems blew up the oil well?