See, I'm practicing to be a pro journalist, so I threw the word "unexpectedly" into the headline.

The survey’s broadest measure of manufacturing conditions, the diffusion index of current activity, decreased notably from a reading of 21.4 in May to 8.0 in June. The index, which had edged higher for four consecutive months, fell back to its lowest reading in 10 months. 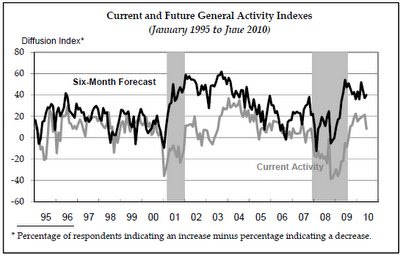 ...For the first time in seven months, more firms reported a decrease in employment (18 percent) than reported an increase (17 percent)... The workweek index also declined into negative territory, its first negative reading in eight months.

Yes, all of this was unexpected:

The number of Americans seeking jobless benefits last week unexpectedly rose to a one-month high, indicating firings are staying elevated even as the U.S. economy grows.

Some companies are trimming payrolls to boost or maintain profits at the same time overall employment has grown each month this year. The figures show that bigger job gains needed to spur consumer spending, which accounts for 70 percent of the economy, may be slow in developing, keeping the unemployment rate close to 10 percent.

“The labor market is not improving,” said Steven Ricchiuto, chief economist at Mizuho Securities USA Inc. in New York. “If you really are going to have a sustainable recovery, you need the labor market to improve.”

Perhaps someone could carrier-pigeon this report to our beloved President and Democrat Congress. Unless, of course, they're doing it on purpose as part of their grand plan to remake American society.