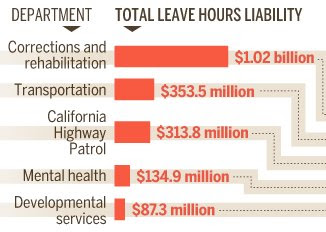 It was another 'Furlough Friday' in California last week.

The state's employees had their 46th unpaid day off Friday and it was supposed to be their last.

But the problem is California's budget deficit remains at "For the love of Pete"-level, totaling roughly $20 billion.

The ironic part of Furlough Friday is that California state employees have accrued in excess of $2.75 billion in paid time off. And unpaid leave actually makes the long-term deficit worse.

Data analyzed by The Bee show that state workers had 75.5 million hours on the books as of May 28. The time was spread across 17 types of leave employees can cash out when they quit or retire. That's equal to nearly 11 weeks of paid time off owed each of the 176,000 state workers whose leave data are tracked by the state Controller's Office. Average cash value: $15,655 per person.

How did California's state workers accumulate so much paid time off? 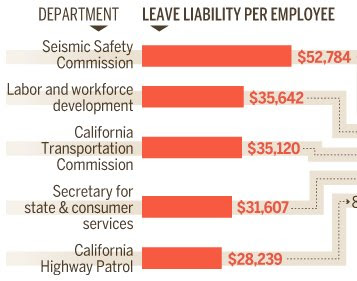 Turns out that the state's unholy alliance of Democrats and public sector unions have created one of the most generous leave policies in the U.S. While most states have high limits on accumulated leave -- New York has a maximum of 300 hours, Colorado's limit is 336 and North Carolina's is 240 -- California's max is 640 in some cases and unlimited in others. These hours turn into a cash balance that represent liabilities on the state ledger.

And, as you might guess in a state ruled by far left Democrats, the "Furlough Friday" policy has caused the state's unpaid leave deficit to grow far more than anticipated. Under state rules, public workers have to take three unpaid days each month before they can use a paid leave day.

The net result: much less paid leave was used last year by state workers, which adds to the overall amount of cash California owes to each worker.

at 8:55 AM
Email ThisBlogThis!Share to TwitterShare to FacebookShare to Pinterest
Labels: Democrats, Economy, Unions