Example 8,118 of the blatant, in-your-face contradictions -- I'm too polite to call them lies -- excreted by the Obama administration's apparatchiks: 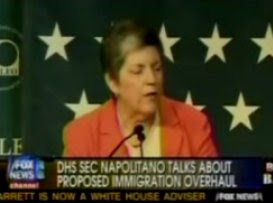 DHS Secretary Janet Napolitano, 6/24/2010: "Instead of doing workplace raids the way they were being done before, we don't do those. What we do is, build cases against employers who consistently, knowingly and potentially violate our nation's immigration laws, going to the illegal labor market, exploit workers..." 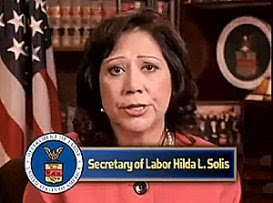 Labor Secretary Hilda Solis, 6/20/2010: "You work hard, and you have the right to be paid fairly. I’m U.S. Secretary of Labor Hilda Solis and it is a serious problem in this country when workers are not being paid every cent they have earned. Remember, every worker in America has a right to be paid fairly, whether documented or not. So call us, it is free and confidential..."
So which is it, Nappie? Which is it, Hildie? Are you going to prosecute businesses for employing illegals -- or just make sure they pay them fair wages? You know, for the jobs Americans won't do.

You people are pathetic. And that goes double for the legacy media.

Evil and incompetent.The perfect bureaucratic storm and the theme for the whole Obama administration.