There really is a road to serfdom -- and we've got a picture!

ORLANDO -- Is it too soon to name a road after President Barack Obama? A new road being built through Orlando will have his name. Roads in Orlando honor some of our greatest presidents, from Washington to Jefferson and now Obama. 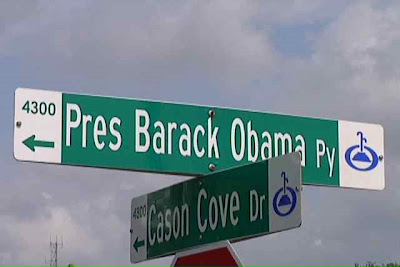 On Friday, Orlando leaders made President Barack Obama Parkway the first road under construction in the nation named after our 44th president, and surely one of the few in history to be named after a sitting president in his first term.

"I think it’s great if people want to support their presidential candidate, but I think it's a little soon," said Orlando resident Karey Graham.

"You don't have to be dead to be honored," said Charles Sledge from Orlando. “We need to honor people while they are living."

In honor of the President's historic Stimulus Package, the road will feature a series of Project funded by the American Recovery and Reinvestment Act signs to mark every one-tenth mile interval of the Parkway.

The one-mile markers will be even more grandiose: each will consist of a four-story tall statue of President Obama in a leadership pose (one is called "Obama looks into the distance") and will be surrounded by fountains.

At the end of the Parkway, which also serves as the entrance to the city dump, the torso of Michelle Obama flexing her biceps crosses over the highway.

Too soon? Nah, it's not too soon. This President is historic!

at 11:46 AM
Email ThisBlogThis!Share to TwitterShare to FacebookShare to Pinterest
Labels: Democrats, Engineering, Obama

Speaking of "engineering," how about we appoint a panel of experts to review an engineering and safety protocol disaster, namely the Deepwater Horizon explosion, fire, sinking and ensuing oil spill. Only, we don't appoint anyone with any experience in mechanical, hydraulic, structural or petrochemical engineering? Instead, let's appoint a bunch of leftist policy wonks who don't even make a secret out of their opposition to new drilling?

Boy! I sure am glad they called it the President Barack Obama parkway, so as not to confuse it with all those other Barack Obamas!

The only road that should be named after our current President is one that accomodates drivers that are completely blind and leads off a cliff. Perhaps a road that leads to an area from which there is no escape would be appropriate.

Gee, if only President Barack Obama Parkway did honor the dead. I could go for it then.