The stock market surged over 200 points today as investors received further confirmation that the Obama Recovery™ is underway.

After reaching a three-year high last month, homebuilder confidence was down for the first time in two months in the June National Association of Home Builders (NAHB)/Wells Fargo Housing Market Index (HMI).

Confidence in the market for newly built, single-family homes fell back to levels last seen in February, before the upward swing experienced leading up to the contract deadline for the homebuyer tax credit. The HMI was at 17 in June, down five points from a value of 22 in May...

Best Buy Co.'s (BBY) fiscal first-quarter profit rose a disappointing 1.3% as sales rebounded only slightly from last year's weak levels, but spending on new stores and other growth initiatives was higher than expected.

The biggest U.S. consumer-electronics retailer by sales described "choppy" customer traffic in its stores and a U.S. shopper who is spending less in the category overall.

The cost of fixing Fannie Mae and Freddie Mac, the mortgage companies that last year bought or guaranteed three-quarters of all U.S. home loans, will be at least $160 billion and could grow to as much as $1 trillion after the biggest bailout in American history.

Fannie and Freddie, now 80 percent owned by U.S. taxpayers, already have drawn $145 billion from an unlimited line of government credit granted to ensure that home buyers can get loans while the private housing-finance industry is moribund. That surpasses the amount spent on rescues of American International Group Inc., General Motors Co. or Citigroup Inc...

Adding to the good news:

• The estimates of the economic impact of the BP oil spill continue to surge.

• The nation's largest states are suffering from calamitous budget deficits, which threaten every aspect of their operations.

Southeastern Asset Management, which manages around $34 billion, has a theory and many veteran observers of Wall Street believe their assessment.

1) The intent of the Securities Exchange Act of 1934... is being twisted and abused for the benefit of gamblers and to the detriment of investors... 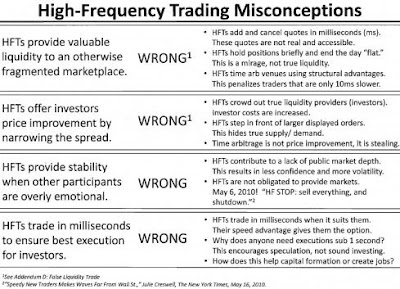 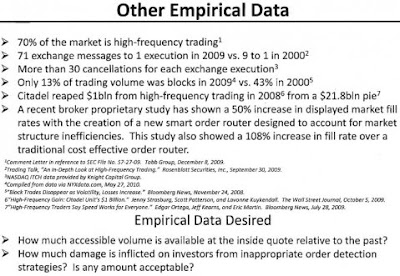 ... 3) Securities prices are presently "susceptible to manipulation and control, and the dissemination of such prices gives rise to excessive speculation, resulting in sudden and unreasonable fluctuations in the prices of securities...

In other words, normal investors appear to be almost completely out of the stock market. And, if SAM is to be believed, Goldman Sachs, the big hedge funds, the too-big-to-fail banks and others backstopped by the taxpayer are driving the market up using program trading. And when it all unwinds, i.e., a bigger version of the 1,000-point "flash crash", the small investors will take it in the neck (again).

So forget about all of this risky and stressful investing crap. Just get a job as a government bureaucrat -- presumably in Commerce, EPA, Labor or Education -- and steal as much as you want.

"In other words, normal investors appear to be almost completely out of the stock market."

Falls into the "know when to fold 'em" category...