Leadership We Can Believe In: BP and Feds Exchanging Nasty Letters That "Seethe With Tension and Display All Sorts of Gamesmanship"

There's nothing like that relief, like you're wrapped in a warm cocoon of safety, you feel when you remember the vast executive experience brought to bear by our commander-in-chief.

And then reality hits and you realize that the President's idea of leadership involves letting BP and the Federal On-Scene Spill Coordinator trade "increasingly testy letters".

The letters exchanged recently between U.S. Coast Guard Rear Admiral James Watson, the Federal On-Scene Coordinator for the BP oil spill in the Gulf, and Doug Suttles, BP’s chief operating officer for exploration and production, seethe with tension and display all sorts of gamesmanship on both sides. 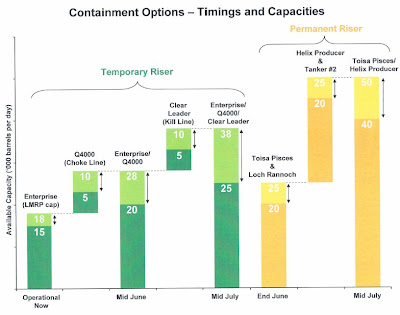 ...BP acknowledges that the U.S. Government is now calling the shots in the Gulf, an acknowledgement that might limit BP’s freedom of action in the short-term, but could reduce its financial liability in the long-term. (“We were following directions from the U.S. Government,” BP might argue in a future courtroom.)

To make that point even clearer, Suttles emphasized that, “This plan was verbally reviewed with Secretary [of Energy Steven] Chu and Secretary [of Interior Ken] Salazar on June 8. No objections were raised.” That sentence served the dual purpose of underscoring Uncle Sam’s deep involvement in the Deepwater response effort, while also making it more difficult for Admiral Watson to challenge BP’s proposed course of action (to which Chu and Salazar supposedly had “no objections.”) In effect, if Admiral Watson questioned BP’s plan, he would find himself picking a fight with two Obama cabinet members.

...The public in the UK, as well as politicians and the British media, have openly begun to resent the American media – and President Obama – for supposedly over-emphasizing the British connection to this environmental catastrophe.

...in a not-too-subtle attempt to draw Uncle Sam into the oil-covered, sinking ship – and to provide BP with a carefully-crafted set of excuses for its less-than-stellar response efforts thus far – Suttles closed his June 9 letter with a somewhat insincere note of feigned obedience: “If there are any areas where you believe further action is required to fulfil your instruction, please let us know and we can set up a session to discuss,” wrote BP’s chief operating officer.

On June 11, Admiral Watson fired back with his own letter. In four terse paragraphs, the Coast Guard’s Federal On-Scene Coordinator tartly noted that “additional capacity is urgently needed” because BP’s plan had been built with flow rates in mind that have already been revised substantially upwards. “I am concerned that your current plans do not provide for maximum mobilization of resources to provide the needed collection capacity consistent with the revised flow estimates,” wrote Adm. Watson.

Now this is leadership we can believe in!

And thank goodness that Secretary of Energy Steven Chu and Secretary of the Interior Ken Salazar are reviewing all of the plans. Their vast experiences in the areas of oil spill mitigation and disaster relief rival those of the President's!