Citing news reports that BP CEO Tony Heyward spent the weekend at a yacht race, President Obama called for the resignation of the embattled executive.

"While the Isle of Wight Yacht Race is a prestigious national event, for Mr. Hayward to spend the weekend --" 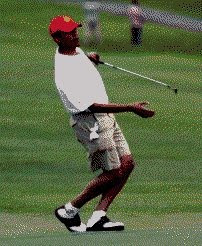 After the brief interruption, the President continued, "-- to spend the weekend enjoying a pristine water-based extravaganza when so many in the Gulf of Mexico are suffering."

The Vice President leaned over to whisper something to the President and his statement was accidentally captured by an open mic.

"And another thing," the President droned on, "the greens here at Bethesda Country Club do a disservice to an otherwise fine reputation. They are so fast that golfers who aren't professionals have literally no chance of anything less than a three-putt."

The President's brief statement to the press ended when David Axelrod, playing in the foursome behind the President's group, beaned Politico reporter Mike Allen.

at 3:00 PM
Email ThisBlogThis!Share to TwitterShare to FacebookShare to Pinterest
Labels: Democrats, Obama

I made a video on this subject and the AP clip with the President singing is a keeper. I also have his latest clueless BFD joke: