Fun for the whole family: Write your own Obama Speech!

Papa B pens an instant classic: 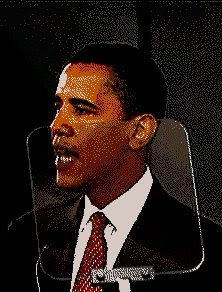 After the last eight years of abuse and neglect by the previous administration, we inherited an unprecedented situation in the (oil|banking|insurance|pharmaceutical|healthcare) sector. The greedy and careless (big oil companies|bankers|insurance companies|drug companies|doctors) had allowed lax regulation and unprincipled speculators to abuse the working people on Main Street with unfair practices and risk-taking on the workers' tab.

From day one, we've worked 24-7 to boldly confront the new reality, one of the worst situations since (the great depression|the soviet union unfortunately collapsed|elvis died).

This is the first thing I think about when I wake up and the last thing I think about before I fall asleep each night. And despite this unprecedented situation, we will find a way to overcome the greed, neglect, spending and lack of regulation -- which we inherited from the prior administration.

Let there be no mistake, I am on the job and I will consult every expert, solicit every idea, no matter the source, to find out whose ass should be kicked. Because the status quo, the unprecedented failures of the prior administration, can not be tolerated.

Let me be clear, the time for talk is over - the current situation we inherited from the previous administration, is unsustainable. Therefore I have called for a blue ribbon commission to study this mounting crisis, and after we duly note their recommendations, I'll follow whatever orders (John Podesta|David Axelrod|Dana Milbank|Paul Krugman) gives me.

That is my promise to you. And may Allah (pbuh) have mercy on your soul.

Feel free to add your own platitudes in the comments and we'll try to adjust the TOTUS feed accordingly.

Let me be clear, because I have been consistent on (issue du jour here) from the beginning: (preferred position of crowd being addressed here).

The [insert name of industry inolved in latest "crisis"] is broken and I propose a comprehensive reform that will hold [name of industry] accountable.