Bitter Queen alerts us to a KGUN News 9 report from Arizona that illustrates the deadly ramifications of open borders.

Two men are found in a remote part of pinal county shot to death. The Pinal County Sheriff believes the men were shot by fellow smugglers. Paul Babeu tells KGUN9 News this is just another example of drug violence spilling deep into Arizona. 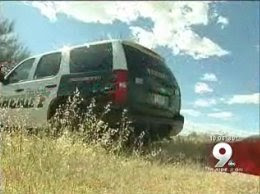 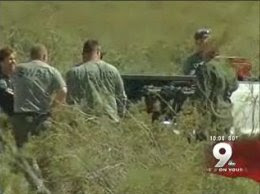 It was just five weeks ago that deputy Louie Puroll was shot in a drug corridor in west Pinal County. On Sunday, more violence in the same area. Around 7:30 p.m. that night man calls 911 speaking Spanish. He says, "somebody shot me. While we were running." 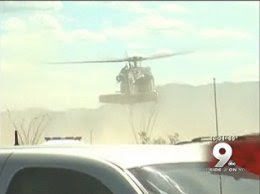 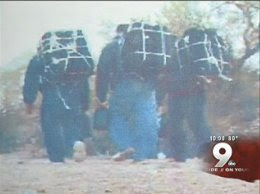 Sheriff Paul Babeu believes the caller was smuggling drugs with the second victim.

"A competing cartel or other people stole their product from them and also killed them," Babeu said. 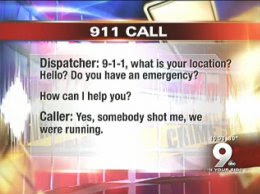 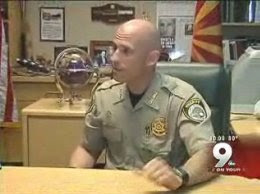 The sheriff admits the cartels are operating in his county and without the federal government's help they can't get control. KGUN 9 News asked Babeu flat out if cartels control parts of Arizona.

"Absolutely, they have in terms of the remote areas in the drug corridors in the desert here in west Pinal County. Our government has even erected signs warning citizens to beware this is a known drug corridor," Babeu said... 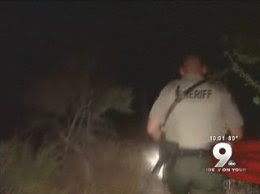 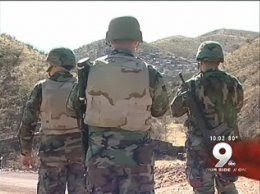 ...Deputies found an automatic rifle near one of the men who was killed. The pair has yet to be identified but Babeu believes one of the men has been caught illegally in the United States at least seven times.

These are our genius federal bureaucrats at work: instead of erecting a fence, they put up signs warning American citizens to stay away -- implicitly tolerating the corridors that expedite the flow of drugs into the U.S.

And these are the very same sort of illegal aliens that President Obama has ordered authorities to handle with kid gloves in country-club like facilities: minimum security detention centers, dance classes, hanging plants, open Internet access and free phones among the benefits.

It's sheer, unmitigated insanity. It's November or never, folks.

Update II: Vanderleun offers us a photo of the signage that is somehow supposed to make up for the lack of a fence. 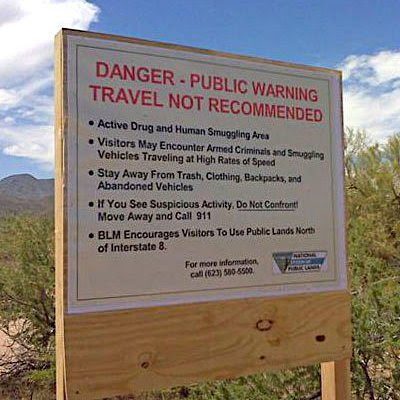 But don't worry, folks -- anyone who opposes Arizona's law is a Nazi-winger for wanting to prevent drug- and human-smuggling operations from taking over large swaths of U.S. territory.

Dodd's been on the committee since 84 and the situation has worsened? Guess it's a good thing he's not running for re-election.

By Senator Dodd's officeSenator Chris Dodd (D-CT) will lead a Congressional delegation to the 49th annual Mexico-U.S. Interparliamentary Group (IPG), which will be held this weekend in Campeche, Mexico. Dodd, who is the longtime Chairman of the Senate Interparliamentary Group, will deliver remarks at the meeting’s opening ceremony on Saturday.

“What binds our two nations is more than a border, but a common history and common set of interests for our people – democracy, opportunity, prosperity, security,” said Dodd. “We also share challenges – from threats posed by drug traffickers, gangs and criminals to climate change. But most important of all—we share a future. And to secure our collective future, we must work in partnership.”

The Mexico-U.S. Interparliamentary Group is an annual meeting of legislators from Mexico and the United States to discuss bilateral issues of importance to each nation. At this weekend’s session, members of the IPG will discuss issues related to immigration, trade, prosperity and competitiveness, and national security.

Dodd, a member of the IPG since 1984, has long been a supporter of strengthening U.S. ties with Mexico. Dodd is a senior member of the Senate Foreign Relations Committee and chair of its subcommittee on Latin America.

Mine the damn border and be done with it.