The Rod Blagojevich defense team filed a request yesterday that federal prosecutors be compelled to turn over FBI notes of its 2008 interview with President-Elect Obama. The reason? Blago's chief of staff John Harris has now -- on the record -- contradicted the prosecution's assertion that Obama had no knowledge of a quid pro quo involving his BFF Valerie Jarrett.

Rod Blagojevich's lawyers say they should be privy to remarks that President-Elect Obama made to FBI agents in December, 2008... The defense team has filed a motion asking for written reports of Obama's two-hour interview with prosecutors and the FBI, saying that testimony by key government witness John Harris has opened the door to possibly new information concerning Obama. 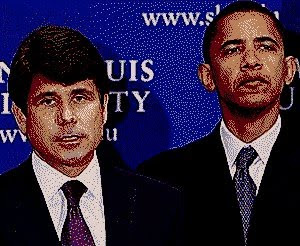 They say that testimony contradicts the government's previous public statements that Obama knew nothing about deal-making involving the Senate seat appointment.

That includes testimony from Harris that SEIU union leader Tom Balanoff was delivering a message to Blagojevich from Obama as well as testimony that Blagojevich was told Obama knew the then-governor wanted a cabinet position in exchange for appointing Obama friend Valerie Jarrett to the open Senate seat post.

Obama, as well as others close to him, were interviewed by federal investigators following the arrest of the then-sitting governor Rod Blagojevich.

Judge James Zagel has blocked a defense request to subpoena President Obama, saying what they were seeking was irrelevant to the case. Zagel did say he might reconsider the issue as the trial was underway.

Why would Obama's testimony be off-limits to the defense? It's Chicago, dammit!