World's dumbest blogger: The Obama 'recovery' threatened by outrageous GOP demands that unemployment extension be paid for by Congress

Just when you thought Matthew Yglesias couldn't sink any lower on the scale of intellectual rigor, he comes up with a new, mind-roastingly inane missive that sets new records for vacuity. His latest post -- "Senate Republicans Team Up With Ben Nelson to Strangle Economic Recovery" -- is pithy and yet... has it all when it comes to ludiocrity (is that a word?).

Arthur Delaney reports that “Democratic leaders in the Senate have apparently failed to win enough support to overcome a Republican filibuster of a bill to help the poor, the old and the jobless, despite making a series of cuts to the measure over the past several weeks to appease deficit hawks.” To be clear about what’s going on here, the bill is supported by a majority of Senators. But a minority of 41 Republicans plus Ben Nelson will suffice to kill it, and kill it they shall.

Rather than hold the Obama Democrats to account for the trillions in failed economic initiatives -- for a not-so-shovel-ready Stimulus package, burgeoning unemployment, deteriorating banks, a worsening foreclosure crisis, nationalization of failed auto companies, the Raines-Gorelick destruction of the GSEs (to name but a few) -- the WDB asserts that the GOP is somehow damaging the awesome Obama recovery by demanding that Democrats start paying for their limitless unemployment-slash-welfare programs. 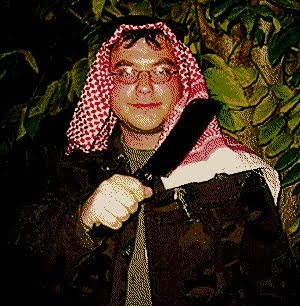 You know, the "unemployment benefits" that last two years and now has workers turning down real employment offers so they can remain "on permanent vacation".

As for the "recovery"?

You mean this recovery?

Yglesias represents intellectual flaccidity at its finest; he is, in essence, a pundit for the pointy-headed. But he is good at it.

This is what gets produced when someone who doesn't understand the first thing about economics, money, currencies and global capital flows takes a talking points memo from the Dems and gives it a whirl.

Is that a traditional Arab beheading knife, too?

You are so frickin' stupid I'm amazed you've got enough brain-stem to keep breathing without conscious thought.