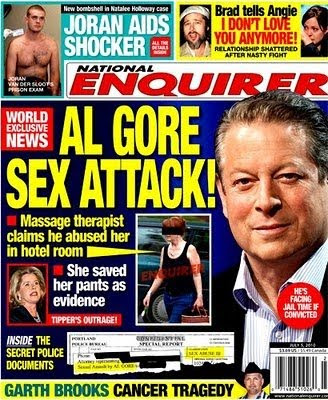 AL GORE has been accused of sexually attacking a masseuse in Portland, Oregon - and is named in the official police report about the alleged assault, The ENQUIRER has learned exclusively!

The bombshell story will appear in the new issue of The ENQUIRER and will include the secret police documents, a photo of the woman making the stunning charges and will reveal the shocking details about the pants she saved as evidence!

Our investigative team uncovered the amazing story just weeks after the former Vice President announced that he and wife TIPPER were ending their 40-year marriage - amidst reports she suspected her husband was involved with "a gorgeous massage therapist."

No criminal charges were brought against Gore, but the Portland police prepared a document marked "Confidential Special Report" - which records the explosive allegations of "unwanted sexual contact" by Al Gore "at a local upscale hotel."

The ENQUIRER is withholding the name of the 54-year-old woman making the stunning accusations because she is potentially a sex-crime victim...

If acquitted of the charges, rumor has it that Gore's next career move may be a prime-time show on CNN, possibly in the slot after Eliot Spitzer's new program.

at 11:46 AM
Email ThisBlogThis!Share to TwitterShare to FacebookShare to Pinterest
Labels: Climate, Crime, Democrats, Gore, Spitzer

Geeze...are we going to have to deal with another oil spill?

Pay the lady big bucks to go away.