In increasingly respectable circles -- i.e., not this blog -- and on a more frequent basis, politicos and pundits are bandying about the I-word. No, not the I-word that President Obama won't use (Islam), but impeachment itself. Consider:

• At the invaluable American Thinker, attorney Raymond Richman asks, "Is Obama's BP shakedown an impeachable offense?" Richman is incredulous that Obama "insist[ed] that his own personal organization take over the job of paying claims" and that such an organization will operate "without any law, legal controls, or binding rules to guide it on how and how much those injured materially by the oil spill (and whom among them) will be paid" 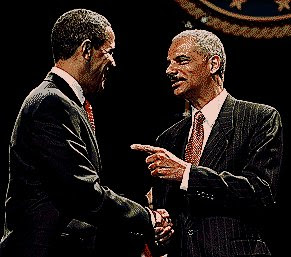 Richman argues that the President has, through explicit ("ass-kicking") and implicit threats, forced BP to agree to the slush, I mean, escrow fund and that such an action is "beyond the powers of his office." He terms these actions fascist, Chavez-like, and that ultimately they represent an impeachable offense.

• Rep. Darrell Issa of California believes that the White House job offer to Joe Sestak is clearly illegal and "could lead to the impeachment of President Obama". Issa called upon the Justice Department to name a special prosecutor but, as expected, Attorney General Eric Holder has refused.

• Rep. John Kyl of Arizona has stated that President Obama told him privately that he will not secure the border, because Republicans would then have no reason to support "comprehensive immigration reform" (amnesty for illegals). Were this allegation proven true, the President would be violating one of his clearest requirements under the Constitution. Would a "dereliction of duty" charge or even an "accessory" status for crimes committed by illegals be possible?

• Few of President Obama's appointees are as controversial as Eric Holder. Holder appears to be the most unvarnished political operative to occupy the Attorney General's office since John N. Mitchell under Richard Nixon (the first A.G. to be convicted of illegal activities). Among Holder's outrageous decisions, none is as blatantly partisan as his decision to drop charges against the New Black Panther members caught on videotape harrassing voters at a Philadelphia polling station. Furthermore, the aftermath of these activities are also clouded in controversy as those officials charged with preserving the rights of voters are stonewalled at every turn. Could Holder and/or Obama be held accountable for a clear failure to discharge their duties?

Should the President be impeached? If so, on what grounds?

There are, after all, so many offenses and affronts against the American people that it seems difficult to choose.

Sedition and breathing, but not necessarily in any particular order.

The I business should be the first one on the agenda of the new Rep. Congress

The charge: Marxism and Dereliction of Duty.

Let's say that there existed absolutely incontrovertable evidence that would convince the American public to demand that Zero be impeached, convicted and removed from office.

Three words explain why no politician will pursue these charges...

I don't like Zero at all. That said, a President Biden would be a complete disaster.

azlibertarian: a Congress which would impeach and convict Obama would be a Congress which would not allow a President Biden to be the unmitigated disaster he would otherwise be. Quite frankly, an Obama impeachment would leave a President Biden fairly neutered, leaving only the opportunity for him to make asinine statements and pop off four-letter-words to the media who adore him so.

Would he be worse than Obama? I think anyone would be an improvement.